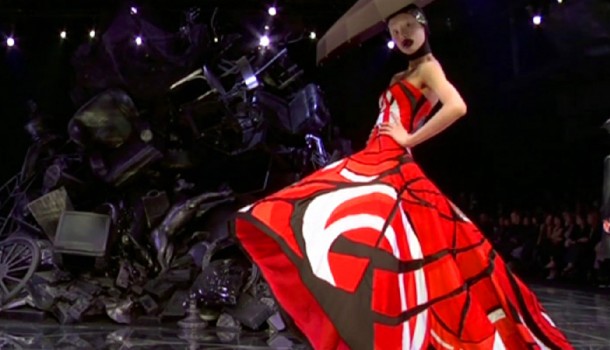 semi skinhead, semi punk, “peeved”, inconvenient but so talented, gifted and merciless! Alexander McQueen – the “bad boy” of fashion. He sucked the trends everywhere and throws them back as “naked facts“. He uniforms bankers, let them run with “Barbie–Ken–haircuts”, after the banking crisis in 2008, kind of artificial figures run the fashion; Models with oversized mouths fabricate bizarre movements, or he staged the expiration of fashion: 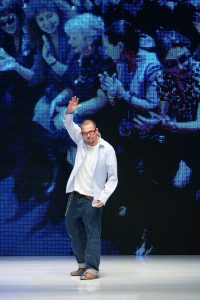 theatrical, with blood smudged Models. In his “Horn of Plenty” – show, a parody of the affluent society in houndstooth, he criticized the fashion world with crazy exaggerations of the Haute Couture World. The glamorous shreds even attracted the fussy eyes of Anna Wintour*, who applauded with her clapping hands raised. “You’ve got to know the rules to break them. That’s what I’m here for, to demolish the rules but to keep the tradition,” that’s what he lives, his motto. The crazy Brit outgrew modest proportions of London, with his highly meticulous art of tailors craft. On good fit and ingenious cuts he put painstakingly much value. 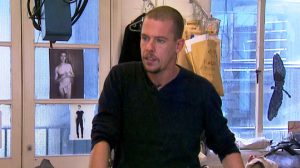 As early as 16 years, he started in London’s Savile Row to learn the tailors craft at Anderson at the Traditions & Sheppard and Gieves & Hawkes. About creations of theater costumes, working with period materials for the Japanese designer Koji Tatsuno, McQueen ended up as an assistant to Romeo Gigli in Milan. He made his Master of Arts in London and founded, in 1993, his own label “Alexander McQueen” for women’s fashion in Haywards Heath.

With its opulent, eccentric creations and wild, sometimes scandalous fashion shows, he blossomed into the enfant terrible of British fashion scene. In 1997 the fashion house Givenchy ordered him surprisingly as designer for haute couture, within the LVMH Group. McQueen was the successor of John Galliano. Givenchy planned with him to rejuvenate his collections. His spectacular creations, technical finesse and provocative ideas, worried McQueens fashion shows continuously for sensations and international media interest – it could be just not good enough to sell. 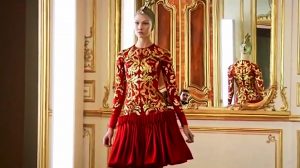 End of 2000, McQueen had to sell 51% of his own company to the Gucci group. Thus he lost his Givenchy items. Under PPR he remained creative director of his own label. After his voluntary death in 2010, his former assistant, Sarah Burton, is leading the Company now; she became the new Creative Director, so the label continues.

His eccentricities to shock and at the same time to amaze, lives furhter on – as a legacy in his fashion house Alexander McQueen continues.

Arte shows, shortly before the Prêt-à-porter Shows will start in Paris, a documentary about one of the most radical Designers, Alexander McQueen (1969 – 2010): Das Testament des Alexander McQueen 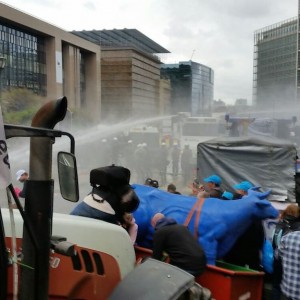 With hundreds of tractors dairy farmers are actually demonstrating in Brussels and thus show their indignation against the politics...
Copyright 2014 Ruth Schalk
Back to top