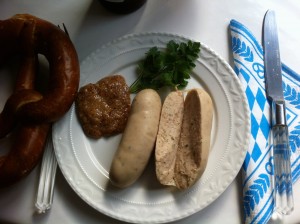 1500 different types of sausages you can find in Germany, as many as nowhere else, they say. There are basically three types: raw sausage, cooked sausage and boiled sausage. A very well known boiled sausage is the Bavarian veal sausage. It is considered a typical Bavarian specialty. White sausages are today made ​​from pork (formerly veal), pork bacon, beaten egg whites and salt, prepared according to the recipe and seasoned with parsley, pepper, lemon powder, mace and onions, ginger and cardamom also. Because the meat is seasoned not with nitrite, but with saline, the sausage is gray-white. They are prepared by being hot for 10-15 minutes at 70 ° C , warmed slightly salted water; Hot not, otherwise there is a risk that they will explode, lose their flavor and can not be properly peeled off. Still hoisted it: white sausages should not hear the lunch bell at 12 clock. That comes from the time when there were no reasonable refrigerators. In another statement, they were mornings sold in restaurants to craftsmen, which should make for lunch space for more affluent clientele. Today white sausages are served throughout the day. (Source Wikipedia)

So far everything organic, if it respects the sausage you also to buy at the organic butcher; So on Eco-markets, both reported organic butchers etc.. The popular white sausage packaged models are mostly equipped with pork and beef casings from factory farms. The fitting sweet mustard contains protein. It comes mostly from the poultry fattening systems, unless you buy it in the Eco-shopping-centers as reported organic mustard. White sausages are traditionally eaten with sweet mustard, pretzels and wheat beer, the intestine is often not eaten. The sausage is either “gezuzelt” (peeled off) sucked his teeth from the gut – Oh man , this is not so easy, or they halved with a knife and then remove them from the skin. But it can also be eaten, like most other sausages with natural casings, together with the skin.

According to legend, the sausage in the guest house was Sepp end of February 1857 invented “Perpetual Light” at Marienplatz in Munich from Moser rather random. The Manager of teh pub walked the sheep casings ( from sheep ) for the veal sausages while were waiting guests. He is said to have then sent his apprentice to get new ones. But he came back with hog. In the emergency Moser filled it anyway with the finished ground, but not fried sausages, but scalded them in hot water because he was concerned that the hog could burst during cooking . (Source Wikipedia)

From mid-September this traditional boiled sausage has in Munich boom, always to the Oktoberfest at the Theresienwiese. In the last 200 years ( first 1810) it became the largest festival in the world . Approximately 6 million people crashing lassens there.

In the Hamburger French period ( 1806-1814 ) the personal chef of Marshal Davout developed, starting from the prepared pork ” boudin blanc”, a luxury variant, the honored guests were second breakfast purposed in their visits or citizens of Hamburg . What makes this sausage was not only the quality veal, the fine flavor and careful preparation , but also the accompanying caviar , for in the same sturgeon were caught at the time masse. (Source : Wiki )

TTIP, CETA - What is the problem? 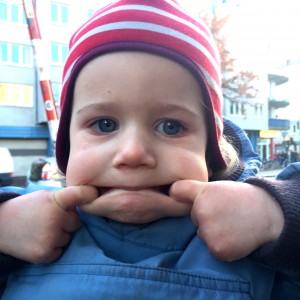 Always Thursdays have the Ghent everything on their plate except meat  - by law! Since May 2009, the public canteens...
Copyright 2014 Ruth Schalk
Back to top