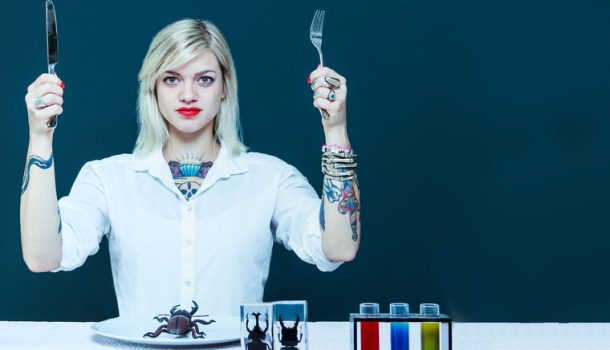 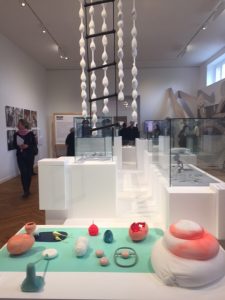 Johanna Schmeer, Bioplastic – Thoughts about how to deal with garbage

What, how and where will we eat tomorrow? What does the cow of tomorrow will look like? More 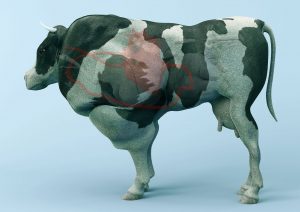 than 30 international designers, creators and scientists went to the ground for nutrition-relevant questions for over a year, for the current exhibition at the Museum of Arts and Crafts in Hamburg, Germany.

The Food Revolution 5.0 is a bold rockn ‘roll through the five segments: farm, market, kitchen, table and lab. Taking into account the society of today the artists reflect in their works the current problems of our time. The “turbo dairy cow” of tomorrow will be shown by Paul Gong. A powerful animal. One can sense his suffering formally when one thinks how much milk the helpless animal would have to produce and how his body reacts to it. Then again the relaxation, but for the chicken. Austin Steward uses a 3-D glasses, a more beautiful world 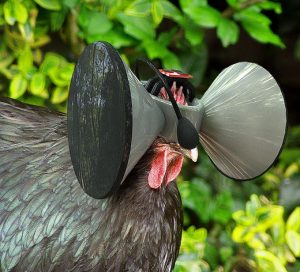 for the suffering chicken. If it is full of frustration and horrored, tormented between masses of other hybrid chickens in factory farming, the glasses goggles at least a more beautiful life. What would the chicken say? 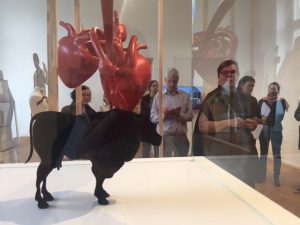 Huge Cow of tomorrow in front of a big Heart Plastic

Some work is also quite realistic as the new way of farming: animals would then live on the land again and the farmer lives on it. The ammonia problem is to be solved with a new technique that separates manure and manure. There are even good fertilizers. Even phosphorus can be extracted from it, a raw material that is becoming ever scarcer. In the Netherlands, a farmer is trying to implement this idea, says Vianne Makking from Studio Makking.

How will our digestion change, is another consideration. Can we re-engineer our bodies? To an extended digestive system? So that we can eat different things in the future? If possible, will we walk around? With two green bowls and draw our food up the edge of the road? With the help of a huge grass processor?

“Between” – Design for an overpopulated Planet; Anthony Dunne & Fiona Raby 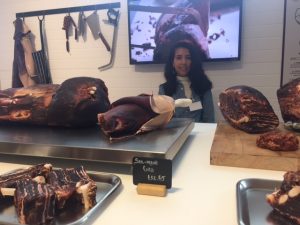 What is wrong with our food? Are we optically and informatively pushed into a wrong diet?

Are we optically and informatively pushed into a wrong diet? What is certain is that the appearance of food plays a crucial role in the decision for us to access. Not for nothing, there are foodstylists. The Dutchman Tom Matton has developed a kitchen that works independently. It recycles itself almost by itself through an ingenious sequence of procedures. He has lived in Wendland for 15 years.

Large panels and graphs show how irresponsible we waste: resources such as forests, water supplies, etc. On the one hand, the development in the industrialized countries, as in Germany, where every year more than 80 kilos of food is thrown away, on the other hand, in the developing countries , Hunger, misery, 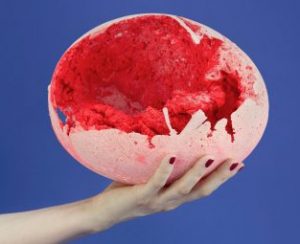 death. Does it help if we replace meat with algae? 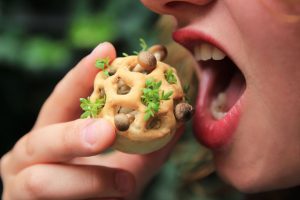 This is how the artist Hanan Alkouh dealt. “When you roast this particular alga, it tastes like bacon, with the typical light-metallic umami taste,” she says. Of course you would have to think about how to grow algae without damaging the coast. For several weeks she made a carcass from the sea grass for the exhibition, almost original.

In just an hour the slaughterer would then have cut it down as in nature: for years she has been growing up, and within a few hours we have been rebuilding her.

Student Carolin Schulz threw a paste of flourworms into the 3-D printer and formed a “false hare” from it. Layer by layer, elaborate and slow, the animal grew. The aim of this story is to bring the spectators into the ponder. Questions should be asked. Farther are also mushrooms are a big issue. It even creates crockery from it, or new design food in the 3-D printer shaped – but is that sensible? Of course not! Just as little as making food for 12 billion people to produce although the Earth is currently populated times with about 7.5 billion people. 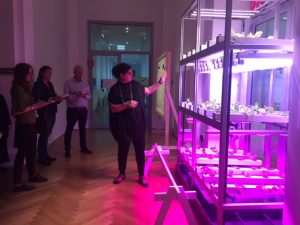 Waste – what can you do with it? To create artificial eggs from it, to perfect the absurdity? Society in Change! Where has the table culture remained? Sit together and eat together? Cozy, enjoy, appreciate? Dr. Sabine Schulze, curator Dr. Claudia Banz, and the artists invite you to an informative, interesting and amusing excursion through time, into the time ahead. You get balls thrown, quite a lot …

Link: Museum for Art and Crafts “Food Revolution 5.0, what will we eat tomorrow…

Baltic Operations 2017 - The Arlington, The Admiral and the Nato in Kiel

documenta 14 Probably the most important Artshow in the world, the documenta, is being held this time not only in Kassel,...
Copyright 2014 Ruth Schalk
Back to top