The milk quota runs out … 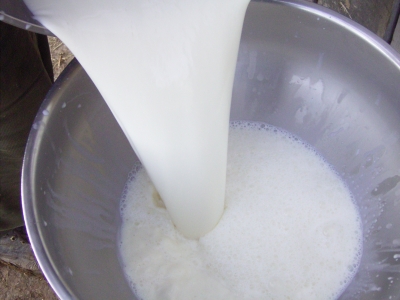 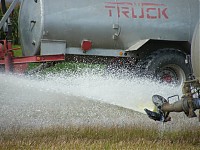 After 31 years, is now an end to the state volume regulation. The milk can flow freely again, the farmers can produce as much as they want. The opinions above are controversial. In some it evokes bad memories.
The History of the Quota
Early 80s produced dairy farmers milk and butter without end, although there was no market. The only customers were forced to the European Union (EU). She bought all of the farmers at a guaranteed price on what they could not settle on the open market. The surpluses stored away them to sell later. But did not work out. The inventories piled up to milk lakes and butter mountains. In desperation, some farmers dumped the excess milk on the farm. To get the overproduction in the handle installed the EU on 1.4.1984, the milk quota. You should stop the price erosion and protect small farms. Who will pay more than allowed had produced in the EU a penalty, the super levy. A whole generation of European farmers grew up with the milk quota. For a long time it was an important instrument of control of the agricultural economy without success. From 2008 to 1%, the rate went up each year, trying on a ‘gentle’ exit to work out. With fluctuations in the market price of up to 20 cents / kg, the rate had failed. These differences could be partly compensated for only by the amount. Some companies grew by buying quotas and surfaces on the stock exchange added milk. The cows were to high performance suppliers. They doubled their milk production, but are also twice as sensitive. For some farmers were managers. Smaller farms gave up. In the last ten years, the number of farms decreased by half. Also some smaller dairies fell by the wayside. The quota was not working as hoped, the undesirable structural change began anyway. Today we know that big mistakes were made in the implementation. Small and medium enterprises have been too little considered, partly even at a disadvantage. From 1984 to 2014, the number of German dairy farmers is of 369,000 dropped to 78,000 (Source: Federal Statistical Office). 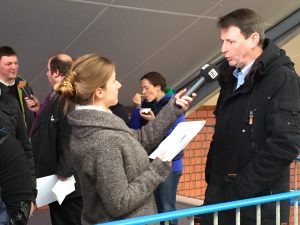 Dairy state of Lower Saxony and the peasantry Association *
Lower Saxony, due to its geographical situation with the flat coastal plains dairy farm, as well as Schleswig Holstein and Mecklenburg-Western Pomerania. The Lower handle 20% of the total delivered in Germany milk supply. Heinz Korte from the peasantry Association is happy that it the quota is over : “The strict quantity corset was an expensive burden!” Nationwide estimates of the Farmers’ Association, the cost of the quota system in all the years caused 15 billion euros, of which about 3 billion would to account for Lower Saxony (Source: LPD). The last super levy for Germany are estimated at 300 million euros. Korte is a farmer himself. He manages a farm with about 160 dairy cows in Bremervörde. Shortly before the end of the quota peasantry Association of Lower Saxony invited some members of the press to visit the model farm of Mathias Meyer in Hude near Bremen. To rate beginning in 1984 lived on the farm still fattening pigs and 30 cows. The family gave up the pigs and expanded the company consistently on to a modern dairy farm with 225 cows today. The animals are in an air conditioned barn with individual boxes and areas with cow mattresses. 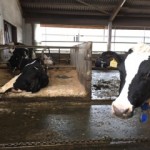 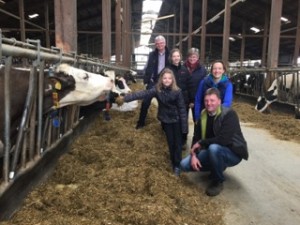 They are cosy and look very well cared for. With a lifetime of 8.5 years, they live longer than most animals in dairy farming. This development was operating for years and the financing takes a lot of money. “If the price of milk is reduced by one cent /kg, it cost me about 20,000 euros a year,” says Mathias Meyer. Thoughts on a contingency plan he has not done. The farmer took over the farm with the 500-year tradition of 2010 by his parents. His father still operates a bull fattening and contractors also part of the operation. The family is well positioned. Anyhow long dry spell would be difficult even for Mathias Meyer. Korte advises serenity, it accounted for but the cost of the rate pressure. In his view, the increase in production will be limited, if only by the area boundary. 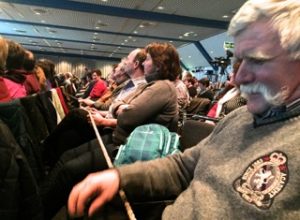 Many farmers, some from Lower Saxony and the BDM see the location less relaxed. For years, they demonstrate against the falling prices. For their existence they need a cost-covering milk price of at least 40 cents per liter. With the strong fluctuations they pay more and have no chance to set the operation on an economic basis, because they can not trap mass by the fluctuating prices. The problems were particularly evident in the Symposium of the BDM at Green Week. About 1,000 farmers met there for briefing and to find solutions as the milk market could be stabilized. The BDM to develop a concept of crisis management as a contingency plan for which the government has not adequately catered for. Dairy farmers in the BDM feel let down by the government alone. Accordingly, there was a troubled, perplexed mood. But you do not want to be defeated and symbolized the with a rope, they pull together all in the same direction.

“The end of the milk quota will lead to an even greater surplus production. Milk producers come under additional pressure, the courts dying goes on and animal husbandry is concentrated in ever larger stables. All this has a negative impact on animal welfare and the environment, “said the agricultural policy spokesman for the BUND, Jochen Dettmer. Martin Hofstetter of Greenpeace fears sick dairy cows: “Without limited quota dairy industry is increasingly using concentrated feed and antibiotics to increase production. Many dairy cows are already completely burned out and sick by the enormous quantities of milk. Cows are on pasture and not in huge factory farms stables “And a declining milk quality:” Consumers are increasingly relying on regional, quality products – not mass produced.. But the quality of the milk will deteriorate if the milk industry employs more concentrates to produce faster and more. The less pasture and more concentrates, the less healthy fatty acids like Omega 3 contains the milk. “

for farmers? It is difficult for them. What they should be oriented? The government is pushing for globalization with the aim of expanding the global market for competition ability further. The DBV sees it positively. Contrary strong resistance should be enforced as possible this year TTIP ***. The EU wants the milk markets open for the global trade. Reason is, inter alia, saturation of both the German and the European market. So where do with all that milk if there are no new markets? The problem is that these global markets are very volatile. Small and medium-sized enterprises will again have trouble in absorbing these fluctuations.

Germany is already the world‘s third largest milk producer, right after Australia and the USA. In Europe, Germany is at the top, right after France, but it has everything no security. Experts such as Prof. Dr. Holger Thiele of the University of Applied Sciences Kiel believes that prices will be a highly unstable in 2015. Dairies such as milk producers need new marketing strategies, such as milk contracts to deal with higher price fluctuations.

for the animals? In dairy farming it has breeded up high-yielding cows and you can see it. The cows seem completely ossified because they gain no fat and meat anymore. Most of the calcium in the milk is flowing. From 1970 until today their milk output doubled. In 1970 a cow gave 20 l per day, they are now tapped about 40 l per day.* The calves get it at best colostrum, milk the first few days, but not of their Cowmother but from the bottle. Cow and calf would get too heavily used to each other. That’s really a significant increase for the body of a cow. If her body, her organism is made for all this, is in discussion. One thing is certain, the average life of dairy cows has decreased significantly. A high producing cow lives on average only 5.4 years and then spent 3 years pregnant (Source ADR).

for the consumer? The prices could fall further. For the consumer pays in other ways: with increasing climate change; significant environmental damage; increasing unmanageability – it becomes increasingly difficult to track where milk actually comes from. Not change the transparency of the intentions DBV nothing. The ways of the trade are often simply not understandable.

alternatives
Some farmers, such as the Ökomelkburen, in north Germany, have joined forces to market their products directly. In addition, they specialize and aim more on quality rather than quantity. And thus obtain better rates and on the long term they are not so dependent from the market. Many organic farmers do likewise. The animal welfare, although there also mature not a hundred percent, but it is usually much appropriate to the species. The cows are not dehorned, they get a little more time to them, do not require quite as much power from them and may the pasture. The calves are however not as happy with their mothers. The consumer knows when buying where the products come from.* Lower Saxony Country People’s Association is part of the German Farmers Association DBV** The BDM is a representation of the German dairy farmers that developed from the Farmers’ Union out. BDM is chaired by Romuald Schaber

***TTIP Transatlantic Trade and Investment Partnership with the USA and Canada; see story in Blog


Tags:  end of the milk quota 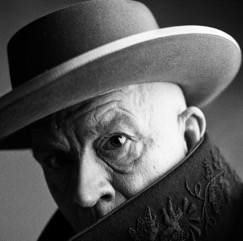 The contribution Photo also shows Picasso, but not the real one. It's the Hollywood actor John Malkovich,...
Copyright 2014 Ruth Schalk
Back to top