The journey begins in one of the most famous steak houses in the world, “Peter Luger” in Brooklyn, New York City. Peter Luger was German by birth. He founded the business in 1887. His son had to sell it in 1950, he was a bit to German, the customers stay away. One of his recent guests bought it at least, for “a whimsically low bid”, Sol Forman. Today drives his granddaughter, the beautiful Jody Storch, the Steakhouse in the old tradition way: large steaks of young cattle which are produced ‘en masse’ and show no fat at all. The journey continues to Yves Marie Le

Bourdonnec, the most famous butcher of Paris. He’s known for very good flesh. In addition, he represents a clear opinion on the animal husbandry and related methods, even on television. He looks a lot after the best of quality rather than quantity. Even American cattlemen breed f.e.. already sustained. A global Steak revolution is detected and tracked.

Looking for the perfect steak Franck Ribère, French journalist, Regiesseur and producer of the film visited several different cattle farms and restaurants to illuminate their meat and eating habits. The film is totally interesting, giving insights into the different types of cattle farming over the world, from Japan to Canada.

In Japan, the Wagyu, the so-called. Japanese cattle, reverberate with classical music, massaged and fed a very special blend of rice and cereals. They are also called Kobe beef. Yves Le Maris Bourdonnec she says’d look like barrels, short legs and a very round body thereon. In Canada, the animals are alway outdoors, even if it’s snowing and only feed on pasture. The Scottish Highland cattle may still romp around outdoors with Tom Nelson on the Isle of Mull. He thinks his tame as dogs. But not only the cattle, and the preparation is different, as long as it is suspended and the selection of the flesh. José Gordon, Spanish cattlemen and cooking, his cattle in Spain and Portugal looking off to the character traits. He is convinced that peaceful oxen or cattle give better meat and their steaks are simply better marbled. The film is a very exciting, informative culinary journey through the precious meat kitchens of the 21st century, a real delight for the taste – buds…

You can by the movie in every store for music 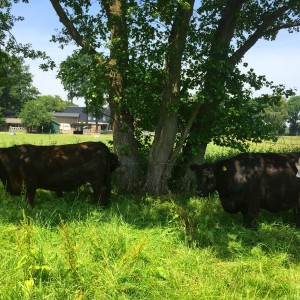 Small and very fine, that's just as she wants to keep her flock Galloways. Judith Reinhard is convinced of the species-appropriate...
Copyright 2014 Ruth Schalk
Back to top