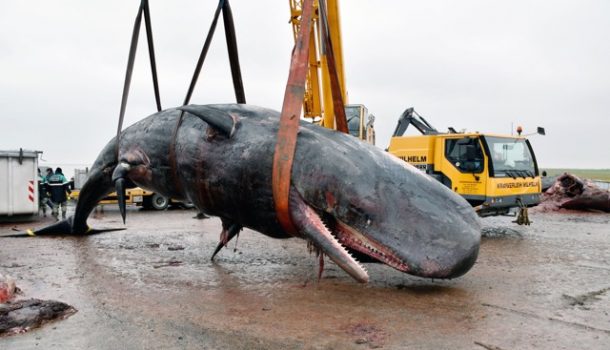 As this story about the Whale desaster on the Northern German Coast is interesting generally, I today post it again.

Prof. Dr. Ursula Siebert researches the the abdomen of the whales. Foto: ITAW

At the beginning of January this year and little later in February again, unusual many sperm whales stranded on the coast of Schleswig-Holstein and Lower Saxony. Everybody wonders why, so scientists work on finding it out. Later on the Ministry for agriculture announced the assay results: In studying the stranded pot whales large amounts of waste have been discovered. Four of the 13 whales showed some large amounts of plastic waste in their stomachs. While this was not the reason for the stranding and death of the animals, but reflected the situation on the open sea again. Veterinarians and biologists suspect that the animals most affected would have had major health problems through the remains of the waste. This became clear during the presentation of the study results on March 23 in the Multimar Forum in Tönning.

huge plastic peaces inside the stomach of the whales Foto: ITAW

Among the most striking “finds” were the remains of a 13 meter long and 1.2 meter wide safety net, which is used in the shrimp fishery, a 70-centimeter-long plastic cover from the engine compartment of a car, and the sharp-edged remains of a plastic bucket. “These findings show us the effects of our plastic society: Animals take inadvertently plastic and other plastic waste to, suffer, at worst, some starving with full stomachs,” explained Minister Habeck. This is a stark warning that intensified action against the waste in the sea.

Sperm whale beached bull for cardiac and circulatory failure  The 13 whales were stranded on Schleswig-Holstein’s North Sea coast in January and February. Professor Ursula Siebert, director of the Institute of Terrestrial and Aquatic Wildlife Research of University of Veterinary Medicine Hannover (ITAW), had some of the sperm removed and then examined in detail with their team. All animals were young, not yet sexually mature bulls, 10 to 15 years old and 12 to 18 tons. They were all in good health and nutritional status. The important for orientation hearing the animals show no signs of a severe acoustic trauma and infection in the different organs with parasites is age-appropriate normal. All animals had fallen into the shallow water of the Wadden Sea. There by running off water at the bottom lying, the weight of their bodies pressed together its blood vessels, lungs and other organs, so that the animals died of acute cardiovascular failure. In their stomachs was Dr. Uwe Piatkowski, a marine biologist from Kiel GEOMAR Helmholtz Centre for Ocean Research, with his students a total of over 110,000 squid beaks as the indigestible upper and lower jaw are called squid. 95 percent are from the Nordic bait squid and the European flight Kalmar. These species occur mainly in the Norwegian Sea, the Barents Sea and the waters around Iceland, the main wintering areas of sperm whale bull. In a stomach the beaks were 21,000 of up to 35 centimeters long bait squid found, which corresponds to a live weight of about 4.2 tonnes.

Last food intake probably in the Norwegian Sea Siebert and Piatkowski make however clear that the presence of sperm whales in the North Sea requires no extraordinary declarations. All migratory species are uncommon outside their distribution area. They open up ever new habitats and to adapt to new conditions. Sperm whale strandings also are not a new phenomenon. Since the 16th century more than 200 discoveries have been documented on the North Sea, including 21 animals that were stranded in the Elbe estuary at Neuwerk 1723rd The occasionally occurring in the North Sea Sperm whales are attributed to the Azores stock. The males of this population spend the winter in the North Atlantic. In their migrations some animals arrive mistake in the for them to flat and food poor North Sea. With her acoustic sense of direction they can orient there badly.

Special – sperm whales in the Multimar Watt forum
The spectacular finds of the whales, their recovery, separation and analysis will be presented today at a special exhibition at the Multimar Watt forum. Gerd Meurs, director of Multimar and involved in the recovery and separation of the animals want, also prepare the subject in a series of lectures. Designated whale experts will present various aspects of whale strandings in detail in May. Habeck: “Recovery of the whales was a logistical masterpiece”
In January three sperm whales were driven at Helgoland and Schleswig-Holstein Wadden Sea National Park in Dithmarschen. Since they formed a dangerous obstacle for navigation, they were rescued by vessels of the Federal Waterways and Shipping Administration of the Federal and the State Agency for Coastal Defence, National Park and Marine Reserve Schleswig-Holstein (LKN.SH). On Holmer Siel at North beach the animals by staff of ITAW, the National Park Authority of LKN.SH and other interested parties were examined and disassembled. In early February were washed ashore on sandbanks off Büsum eight sperm whales in the Wadden Sea National Park in Kaiser Wilhelm Koog and two animals. They were examined and broken down near the Meldorfer port of the same whale experts.“So many sperm as at the beginning have never driven in Schleswig-Holstein. The salvage was a logistical management, all parties to express my sincere thanks, “said Minister Habeck. 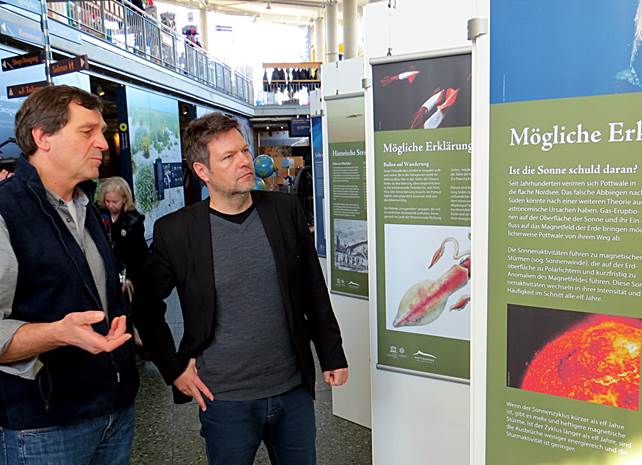 Salvage, disassembly and examination of whales have caused about 250,000 euros costs to third parties. Costs will be borne proportionately by the Federal Government (70 per cent) and country. There are also around 2,200 hours of work that have been done by employees, and the use of LKN-ships and other equipment during LKN.SH. This means that for the LKN 160,000 euros internal costs incurred.

Siebert and Piatkowski suspect that the dead whales had eaten in the Norwegian Sea last time. The first group of three animals had probably only briefly stayed in the North Sea, the second with ten animals probably a little longer. In some of their stomachs, bones and other remains of North Sea fish such as monkfish, cod, whiting and sea hare were found. Since the beginning of 30 sperm whales were stranded alive or dead at the North Sea in the UK, the Netherlands, France, Denmark and Germany. In addition to the North Sea and Baltic coast of Denmark and Germany were stranded killer whales, fin whales and minke whales. Porpoises and striped dolphin were alive found on the coasts of

Schleswig-Holstein in February, but could be brought up on a porpoise back into deep water. The causes of this heaping occurrence are unknown, according to the two scientists. Unusually high temperatures and very strong storms that have been registered in recent weeks in northern Northeast Atlantic, could have pushed southward waters of the Norwegian Sea in the North Sea – and the squid with them. Maybe the sperm of their staple diet are followed, then traveling, as well as other whale species in the North Sea. A plausible explanation, which is, however, not proved, because such ecological relationships are demonstrated only with great effort.

Soybean Intacta developed by US company Monsanto contains residues from glyphosate and produces an insecticide Tuesday,...
Copyright 2014 Ruth Schalk
Back to top