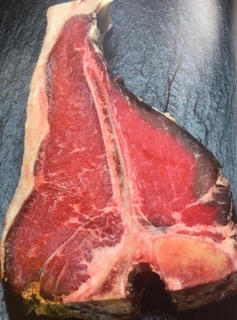 This steak vertebrae bones look like a big “T”. Hence the name of the little brother, the T-Bone steak comes. On the one hand, the rump steak sitting on the other side the fillet steak. The Porterhouse Steak is, as well as the T-bone steak, fillet and cut with bone from the rear back. The two very similar blanks, also called Cuts, differ mainly in the thickness and size of the fillet portion. The porterhouse steak is at least 3,2 cm thick and usually weigh between 700-1000 grams. The T-bone steak is 2 cm thinner and weighs only about 600 g.

Why is it called “Porterhouse Steak”, is not quite sure. Some say the name “porterhouse steak” was created 1840 in New York. Here served the harbor restaurants (“the porterhouses”), the workers juicy and at least 600 g heavy wattles, the porterhouse steak. Thus, the name went round the world. But it could also be a designation of British and American inns where the beer was served Porter. Very often it is attributed to the Americans Zacharias B. Porter, who ran around the turn of the century a Porterhouse Hotel in Cambridge and there offered King steaks under the name. The hotel was conveniently just at the train yard, over the majority of the cattle transports were handled by the East Coast. Unfortunately, however, it has been sealed more than 100 years ago.

BEEF describes it as Olympus of steak cuts: the chewy, tasty strong rump steak on one side of the middle bone, and the handsome super tender filet on the other side.

The steak is usually grilled or fried, 5-7 minutes per side should suffice. It comes because of the small proportion of connective tissue with relatively short cooking times from, depending on how you want it, rare, medium or well done, so well done.

Because of the suspicion by the contained spinal cord can BSE be transmitted, were not available T-bone steaks and porterhouse steaks in the EU from 2002 to 2005. 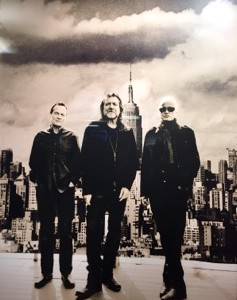 he got them all in front of his lens and even some more Rock Stars, Ross Halfin. Together with the musician photographer...
Copyright 2014 Ruth Schalk
Back to top