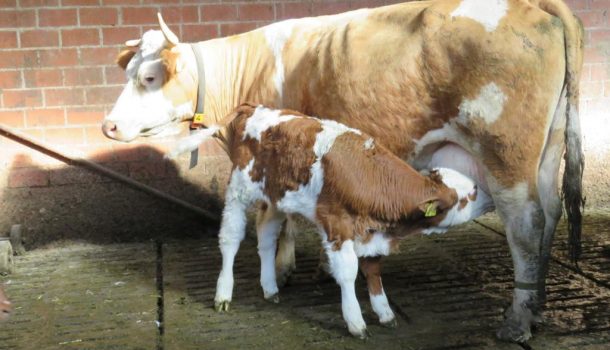 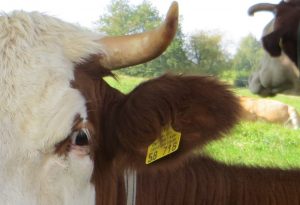 Close to the Swiss border is a dreamland for dairy cows. The Gasswies farm, located in Baden-Württemberg at Klettgau-Village, the farmers allow their 49 horned cows from spring to autumn not only the refreshing pasture, no, there the calves can stay with their mothers – as nature intended it. This is nowadays often forgotten, that milk is meant for the calves and not really for the people. That is why milk is so rich. In Germany, the fat content of the milk in the dairy is usually adjusted to 1.5 or 3.5%. In raw cow’s milk it is as high as about 3.7%, what’s more of lactose. So if you want to lose weight, the better dispensed out the milk in the coffee. Even the low-fat version hidden in 200 milliliters of milk so about 10 grams of lactose, plus 3 grams of fat. That’s more calories than the same amount of Coca Cola contains.
At the Gasswies Farm the calves shall ran to their mother cows after milking. Its called mother bonded calf rearing. That’s the best thing that can happen to them little Cow-Babies, not only for their social behavior, also for their health and their psychological luck. You dont need, or hardly need any antibiotics as they are overall more resistant through their mothers milk. The milk is valuable for the calves, not to be measured in cents! They would give anything for a sip.

The Rutschman’s got that point. The likeable owner couple Alfred and his wife Silvia run the business as a duo since 1998. Then they have taken over the yard of Alfreds father and converted the farm from conventional farming to organic. For the farmer couple organic farming is much more than “not to fertilize and to inject”. Particularly in animal husbandry they have a very clear Guideline: “It can not be, that cows are the entertainment system adaptions, this must be reversed. This is a slow process,” explains Silvia Rutschmann. “Meanwhile, we have almost only cows with horns, but also an investment backlog of about 300.000,- €.” When they took over the farm the barn was aimed at hornless cows, so they had to replace the feed fence, but the milking plant is still outdated and urgently needs a replacing, but till now there was never enough money. Does not matter, the Rutschman’s and their cows are quite satisfied the way it is. 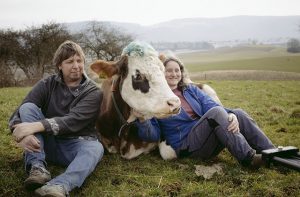 Again in April, May, the Housebull must get active to the brown-colored Simmental ladies. They are therefore inseminated by natural mating. This is usually much less complicated than the artificial insemination; presumably the cows have more fun as well. They say a bull keeps order in a herd, the cows are less bitchy. This year may also be bull calves stay on the farm like they came. Once at the castration two calves died by the veterinary in 2015, the Rutschman’s wish to avoid this risk from now on. Now they fatten up little bulls instead of littleoxen. At the Gasswies Farm all calves whether girl or boy may stay, a real previlidge in the dairy farm business; a speciality which should become common. With their biological mothers they can cuddle for three months, then they are carefully trained to a separation, but only because they then change from their mothers to nursing mothers for the futher bit of pasture. With two years they will be marketed. This is very good because the Simmental cattle is part of a dual-purpose breed, means, the calves put enough meat on. These animals are not pure milk producers. For over 10 years the Rutschman’s manage their farm with the mother bonded calf rearing, which works only through sponsorships. Anyone wishing to support the operation in terms of wildlife and landscape protection, can buy a godparenthood for a tree or a cow there: www.hof-gasswies.de/patenschaften.

A visit is always worthwhile. Slvia Rutschmann is not only fit in terms of cow trained landscape architect also has an eye for the beauty of nature and conveys these always happy group visits. On the edge of the Black Forest can be found operating diversity not monocultures. The dairy cows are at the heart of the demonstration operation. Along with the beef cattle and the young cattle they graze all summer on nearby pastures. On the sunny southern slopes ripe Cherries, Pears, Apples, Plums and Mirabelles. In the fields of bread grain, sugar and protein crops are grown and grown and expanded regionally adapted seed. For their operational concept, the slip’s been awarded the national prize Organic farming.

Beneath you’ll find a map where all the farms are claimed that breed there little cows together with their mom. It’s a campaign of the world animal protection society

All photos unmarked and the Post photo are from the yard Gasswies. 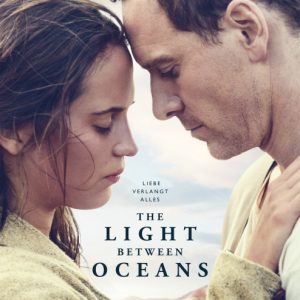 What a lovely pair, what a Love story, what a Drama! Yesterday, the city where everything floates, Venice, celebrated...
Copyright 2014 Ruth Schalk
Back to top