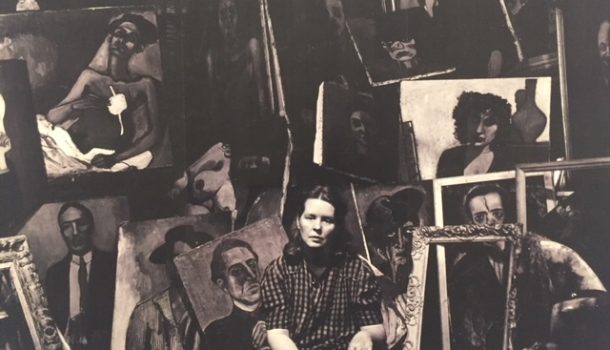 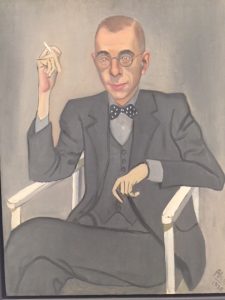 The modern, Alice Neel – at first glance it does not seem so. In her early pictures the persons all look a bit gloomy and severe. Neel, however, manages to breathe the personality of the person into her paintings, perhaps precisely because of their timely, grim facial expressions. Her artworks are almost a bit gloomy in their early stages, emphasized by strong brush strokes and dark colors. At some distance, however, they also appear funny; as she has held, almost meticulously, the respective personalities on the canvas. For example, the special Mr. Green of 1938. His portrait is attributed to the new objectivity. He was Neel’s friend, visited them frequently in Spanish Harlem, and then read to her sons from the fairy tales of the Brothers Grimm.

Neel is great. You can discover her in her pictures, in the accuracy of which she reflected: a personality with wit and strength, charm, vigor and a certain love for the particular. 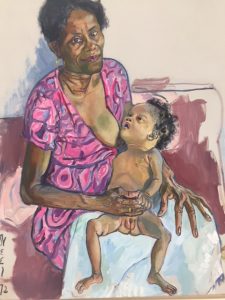 A detail in their pictures always reveals something unique the person, as on the portrait of her maid Carmen, her haitian maid and her baby Judy. Carmen’s right hand Neel painted deliberately disproportionately large. With her normal hand she supplies her little daughter, who gets very small feet from Neel. The baby was sick, it could not stand and did not survive the portrait long.

Alice Neel led an extremely moving life. As a single-parenting mother and a member of the New York artist scene, she did not miss anything. She has “pined” herself to the top but at the same time she has remained very grounded. She was almost a bit rebellious, even for the time, which was quite open at that time. 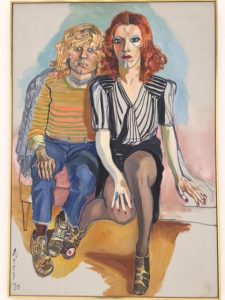 Neel committed herself politically to the time of her life, sympathized with Communism and became a symbol of the women’s rights movement. Her main work is inspired by her New York neighborhood, Greenwich Village, Spanish Harlem and finally the Upper West Side. Alice Neel painted numerous members of the New York’s cultural scene, including the pop art artist Andy Warhol, who described this portrait as the best of him ever created. The portrait of Jackie Curtis and Rita Red is one of her most famous pictures. It is probably one of her first portraits of a gay couple and shows the free life of the members of Andy Warhol’s Factory, a la Neel. Curtis was mentioned in Lou Reed’s famous song “Walk on the Wild Side”, and this wild side also fits perfectly to Neel, according to Jeremy Lewison. He is a consultant for Alice Neel’s estate. 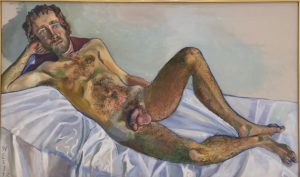 Neel, is one of the few women in the painting who has made it into the public, as a painter of modernity and with her very own view on people and things. Jeremy Lewison, a leading expert on Neel’s work, has curated the extensive show. “Already early in her career, Neel painted radical, open-minded act-portraits of women and men, which differed greatly from the works of their contemporaries. With a special sensitivity she always succeeded in capturing the zeitgeist of an epoch. The images show clearly how Neel sees the world critics criticized their realistic style as a return to the previous century. Too bad, they may not have understood the joke behind it.

Neel was not always squeamish in the choice of her means. The portrait of John Perreaul, the art critic, painter and curator, emerged through a small extortion, in which Neel curbed the curator’s wish. Perreault wanted to borrow the act portrait of Joe Gould for an exhibition on male nude models. Neel declared, on the condition that she had previously made an act portrait of Perreault, which would also be shown in the exhibition. Neel draped the bright painter as Goya had dared it in “La maja desnuda” a hundred years earlier, with a woman of course. 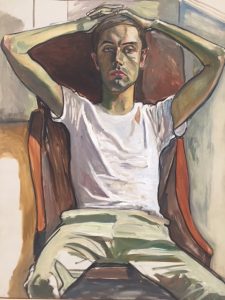 In addition, the picture emerged in the seventies. At that time homosexuality was still punishable. Neel did not care, she did not make a difference between hetero- and homosexuals. She almost takes pleasure in painting. “Whenever I sat in front of a screen, I was happy, because it was a world where I could do what I wanted,” says 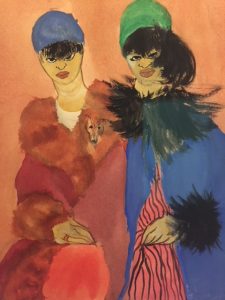 Alice Neel in 1980. Her courage makes the round and pleases.

Even during her lifetime, her works were an inspiration for numerous artists. Numerous museums and private collectors have provided loans for the exhibition, including the Museum of Modern Art, the Whitney Museum of American Art and the Metropolitan Museum of Art in New York, Tate London and the Moderna Museet in Stockholm. The exhibition, which is expanded by about 40 works for Hamburg, is the fourth and final stage of an international exhibition tour organized by the Ateneum in Helsinki.

The exhibition begins with the early epoch of her paintings, portraits of consistently influential personalities and less “important” people for the public – for Neel they were all important. The exhibition has just begun and runs until January 2018 in the link: Deichtorhallen.

In Persia it is called "cake of joy", in Russia "black gold", Caviar... 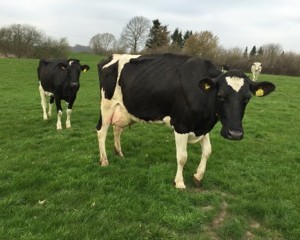 Ex dairy farmers at court The accused looks a bit like Boris Johnson, the British Foreign Minister, in darkblond. Slightly...
Copyright 2014 Ruth Schalk
Back to top