“I’m simply a girl singing,” she says, but with what a voice! Black, soulful, jazzy – phenomenal! 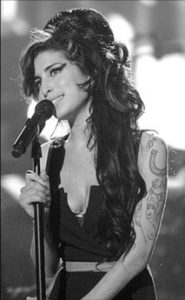 “Back to Black” – her voice drives them quickly to the very top, not only in England, worldwide! Amy Jade Winehouse was not yet 20 when she signed her first recording contract with Island Records. And her lyrics: “I cheated myself, Like I knew I would, I told you I was trouble, you know that I’am no good …” She wrote poetry and music from entirely personal motives. Contents that were important to her, that get under your skin and touch millions of people. The ‘small‘ London girl sings herself with charisma in the hearts of her audience and in the charts, six Grammys she won. She had an exceptional talent, which as well occurs only once in each generation, that what they said immediately in the music industry. But she is really just a girl who wants to sing and wants to be loved.

Amy grew up in modest circumstances on the outskirts of London, in the north of the metropolis. Shortly after her birth, her father Mitch Winehouse mets another woman and falls in love with her. When Amy was nine years old her father separates of the family. Amy sees him rarely. That seems to put a break into her life, from time to time she falls into depressions. Her music becomes kind of a therapy for her. Amy is really shy. She shares her feelings and thoughts through her songs with other people. Her lyrics are extremely impotant for her, she puts a lot of emphasis on them. 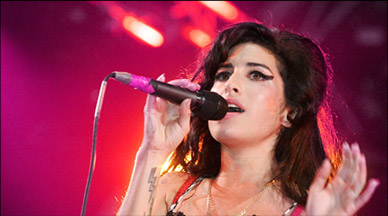 The movie rips off the stool. It shows how things are going, with Selfies, phone recordings, BigBrother everywhere. Amy’s first manager and friend, Nick Shymansky has filmed her permanently. The result is this fantastic documen-tation. Amy returns once more to us: starting as a funky teenager, then an intelligent Startup artist, a Beehive* icon with a madness-soul voice, a Grammy-Star and least as a sad result of a life without the love, the she was so much longing for.

She falls more and more into alcoholic problems and harder drugs. Her husband Blake Fielder-Civil was not help at all, he was also dependent on the drugs. He has probably caused this scenes. Her father is interested primarily in her career, the money and the marketing. Together with her last manager they carry the sleeping Amy, still in a drunken stupor, in a private plane and carting her to Bucharest. Amy who did not want to go on stage, therefore she tooks so much alcohol.  She couldn’t escape. They posed the still befuddled Amy just in front of her audience – Amy on strike and the press makes bad jokes about her.

On July 23rd, 2011 Amy Winehous died and thus entered into the legendary Club 27, that became in a sad way to fame. It was founded in connection with the tragic deaths of celebrities, seemed to weigh a curse on the year 27 old music stars. In 1969 to 1971, with only a few months in between, four of the greatest musicians of this generation died of drugs, medicines, alcohol or an explosive mixture of all: Brian Jones, Jimi Hendrix, Janis Joplin and Jim Morrison. In 1994 Kurt Cobain – each of them was only 27 years old …
The film tells the story of Amy Jade Winehouse and perhaps touches with besides the other musicians. The film is worth seeing, an emotional music and movie experience! In England, the film was launched a few days earlier and it’s already a blockbuster.

The journey begins in one of the most famous steak houses in the world, "Peter Luger" in Brooklyn, New York City. Peter Luger...
Copyright 2014 Ruth Schalk
Back to top