In tails to the cows – Thomas Herbst, the forgotten Impressionist 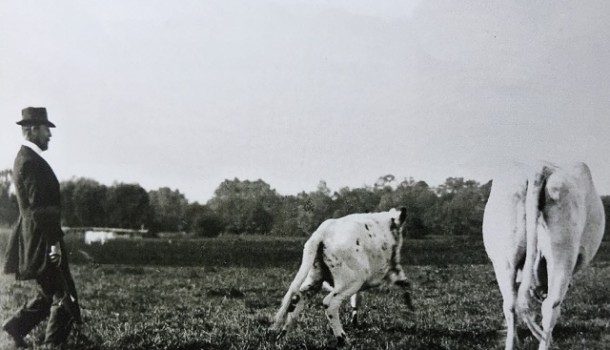 Thomas Herbst is a gem! He is Hamburg’s ‘green’ Impressionist. The first director of the Hamburgian Hall of Arts, Alfred Lichtwark, recognized his talent already in 1889. 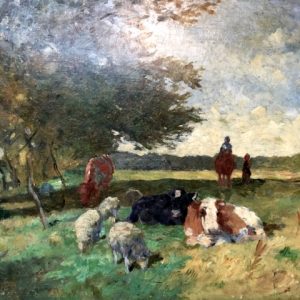 He com- missioned him to paint impressive views of Hamburg. Max Lieber- mann, his very best friend, valued him as a Person and a teacher of Art. But without the commitment of his “lovers”, the Society of Friends of Thomas Herbst*, the painter would probably have fallen totally into oblivion. Though the works of the talented artist are timeless and just now very topical again. He prefered pick szenes out of the nature and of the country life. Much to the amusement of the farmers children and the maidservants, he hunted on scouting quite often in evening dress over the meadows in the valleys of the river Elbe. His painter friend Arthur Illies shooted him on this occasion in 1894 one time. Later Illies told his experiences with his colleague: “Since he was invited often to Dinnerparties, 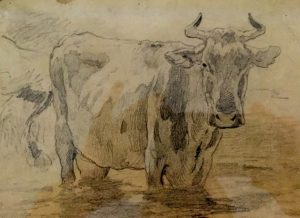 he has older cutaway suits that he used to wear during his paintings now. A brush stock in his backpockets, and on his chest in front, he used to stroke the brushes out, so that its front view is just encrusted with color as his palette. So you see him with his red beard, chasing with flying coattails, and a three-legged camp stool to the delight of the milk girl, behind the cows.” Thomas Herbst did not mind. 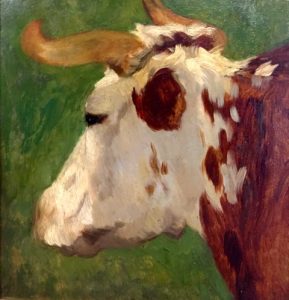 On the contrary, as modern as he was, he was following the Paysage intimate and took his motives plein air, from outdoors. Thomas Herbst was following the impulses of Eugène Delacroix and Corot, supporters of the Barbizon School, whom he met during his studies in 1876 in Paris. He made detailed sketches and partial cutouts of his motives. Back in his studio he puts them together to great paintings. 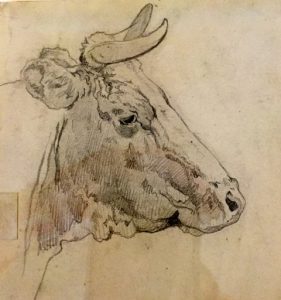 The older he got, the more courageous he became. His paintings came out quite contrary to the paintings then usual, ever brighter and more vivid. Soon he was known for his variety of greens, they were his specialty, as well as his favorite models: cows. For Thomas Herbst his paintings were the most important thing, so he remained unmarried. He believed, a painter would have no time to take care of a family with all its obligations. But he harbored a fondness for tall blond women. 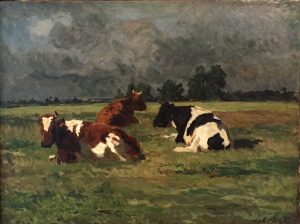 That’s why he particularly liked to visit the Cafe Felber at the Steindamm Street. That’s where he gladly met with his painter colleagues, and on the way there, he wrote, he saw many blond women. His diary was full of stories about them. 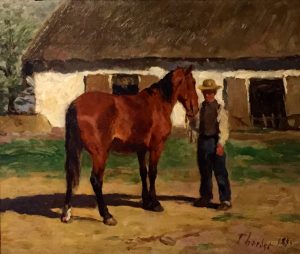 He was certainly fond of girls taking opportunities whenever they stop by. Whether as a teacher in his art classes or during the many evening invitations in the Hamburg Society, which he gladly accepted because of the good meals. Such good food, he could not afford by himself otherwise. The artist lived quite modest and withdrawn. Besides his painter friends, he never ever let anyone else into his studio. Of the more than 1000 pictures he painted, he has signed very few: the ones he liked, and the ones he did paint on canvas. All others, studies, sketches and oil paintings on cardboards, he did not take seriously. He also asked not for great attention, so it was probably that of Hamburg unique Impressionist became no star-artist. From 1900 Thomas Herbst didn’t even issue anymore. He simply had no desire for discussions and he was extremely self-critical. He folded the cartons after use and took them then as a seat. Thomas Herbst lived in modest circumstances together with his sisters, in Hamburg Borgfelde, until 1915. Then at the age of 67 years, he suddenly died. 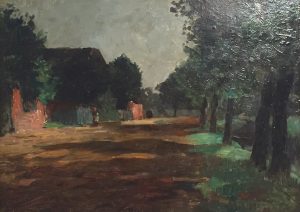 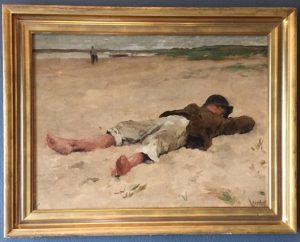 About 100 years ago, again a good occasion to remember the outstanding Hamburgian. The Jenisch Haus shows on this occasion a compre-hensive exhibition, which was drafted in cooper- ation with the Society of Friends of Thomas Herbst, in addition to his main work, numerous works seldomly published were shown his oeuvre. The enchanting surroundings of the former country estate Villa of the Hamburg Senator, Martin Johan Jenisch, he would have liked pretty much, the aestheticians and so on. There, on the 2nd floor, attic treasures hanging on the walls, decorating stained blue walls giving them a quite extraordinary touch.

Until the 1st. November the exhibition will show up at the Jenisch Haus. Thomas Herbst, “Liebermanns Friend und Lichtwarts Hope” a real gem! 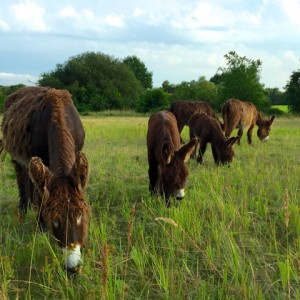 Way up the north of Germany, about 80 kilometers away from Hamburg, you'll find the EU's most unique zoological garden,...
Copyright 2014 Ruth Schalk
Back to top