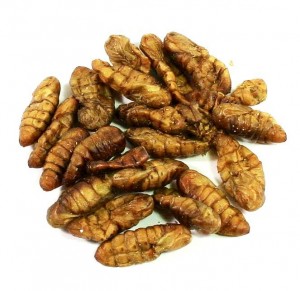 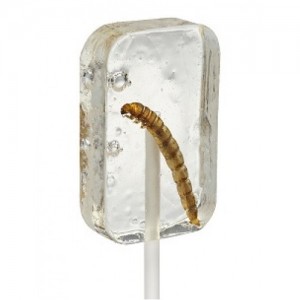 Locusts, mealworms, thick beetles or even the precious silkworm larvae, more and more exotic and daring cooks offer this special “gourmet bites “. The Tequila Worm Lollis and Ant-Lollipops are on sale right now for £ 3.50 each at Gourmet Exotic online.

After all, they are healthy, can be produced in an environmentally friendly and long term. They are perhaps a real alternative, that explained the German German Technical Control Board South just before the year 2014: To secure the future of global food the world needs to double its food production by 2050. Add new protein sources much hope is placed, not least because of the partially favorable balance of natural resources. The experts at technical control board germany show what’s behind the products made ​​from soy, lupine, Insects & Co. .

Even if the test tube burger for all future vision is still expensive: Researchers have long been able to find on the search for new sources of protein. The aim of the secured World Food firmly in mind, offering innovative proteins for human consumption is becoming more colorful. But what is behind these products?

The most well-known alternative for meat protein is tofu from soy beans. The production has a millennia-old tradition: the soaked soybeans are ground, filtered and taken with the help of ferment to coagulate. The flocculated soy protein is pressed into blocks and is pasteurized and vacuum-packed in the trade. The Rohvariante is relatively tasteless and has no meat-like consistency. Quite different is the so-called textured soy protein, which today is as dry granules already with its fibrous structure a popular meat-free basis for Bolognese, goulash or burger in vegetarian and vegan circles.

A new protein source is also the lupine protein. The deoiled lupine seeds are first extracted through several stages carbohydrates and fibers. The resulting ” milk ” is processed as a base to dairy -free ice cream or dried meat substitutes. Gluten-free baking mixes, low-fat sausage and ” protein bread ” with lupine protein are already on the market.

The German researchers Lupin, Stephanie Mittermeier, Peter Eisner and Katrin Petersen discovered the lupins as a full-fledged protein substitute for meat. They have been awarded in 2014 by German President Gauck with the German Future Prize and founded their own company in Mecklenburg West-Pommerania, the Pro Lupin Company. There you can buy everything, from the seeds of lupine to lupine tofu. Butcher Walter Kienast from Greifswald one usually finds some lupine products in the program: Vienna sausages, liver sausage and Lyons, containing less animal fat and for additional Lupineprotein. Access meat, the operation is innovative and progressive, but no organic farm. Lupins are leguminous plants that fix as a natural fertilizer and nitrogens in the soil. Thus, they are also excellent pioneer for more demanding plants, such as Potatoes. In addition, the lupine protein is very attractive as a future substitute for diet. In this area, research Gerhard Jahreis from Jena University who studies the various leguminous plants in terms of their health benefits. He found that the lupine can be supportive in regulating blood pressure.

Fiber rich and therefore often referred to as ” wheat meat ” also holds the Asian Seitan entry into European kitchens. By adding water and kneading the starch is washed out of wheat, so that at the end of a fibrous protein block is created, the marinated with spices and soy sauce and cooked meat free chips or gyros can be further processed. Like the other new sources of protein production cost is very high. Nutrients such as vitamins, minerals and phytochemicals remain largely on the track. Many of the new protein sources have very little taste of their own and are often flavored with sequential marinades, spice mixes, yeasts and aromas. Soy and lupine some people are allergic, so it must be noted specifically in the ingredients declaration. 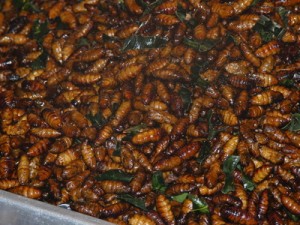 Roasted maggots are true protein bombs. For UN Food and Agriculture Organization FAO insects were already 2011, the food for the future. Antje Gahl of the German Society for Nutrition keeping bugs for a good alternative to meat. As they contain twice as much protein as beef or pork, and are therefore very nutritious. The FAO will mash up with new processing technologies, these protein tidbits meatballs. With flavors then you would get even a reasonably pleasant taste out of, not very different from the traditional meatballs.

Dr. Andreas Daxenberger, food expert at the technical control board germany, however, points out that the classification of insects as food in Europe is still legal gray area, “So it is unclear whether insects as a whole foods are or in the EU the authorization procedure under the Novel Food Regulation subject. For EU isolated from animals food ingredients that have not been obtained by traditional propagating or breeding practices, this is already regulated today. ” For the targeted production of insects for human consumption important medical, legal and quality assurance issues are unresolved. “In insects or insect flour is currently very much in what forms of animal husbandry, industrial hygiene, processing and storage are appropriate at all to protect the health of the consumer reasonable.” Even allergic reactions to insect protein have to be tested .

New sources of protein currently hold true in Europe for the first time walking, but are a niche service. A broad and secure application field for the proteins of this particular type is not provided in the European food law – in stark contrast to the production of good protein sources from conventional or organic meat production and vegetable production.

Scorpion Lolly Pop- Mhjummy? Would be interesting to know how they taste …

Thirty years milk quota, 30 years the milk production was capped on the European market, which expires on April 1, 2015,...
Copyright 2014 Ruth Schalk
Back to top