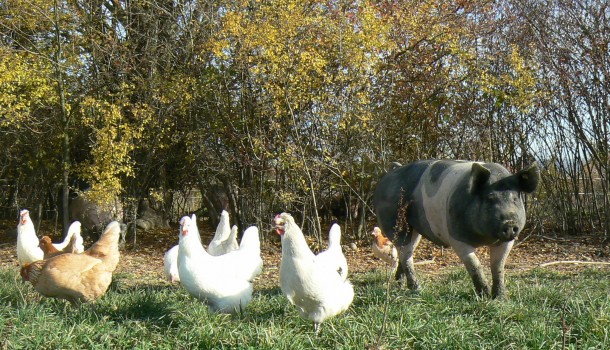 In Germany all warm-blooded animals slaughtered or hunted, provide us with the meat for human consumption. These include above all cattle, calves, pigs, sheep, poultry, rabbits and deer. Less popular are goats and horses. In other countries, even buffalo, bison, camel , reindeer, ostrich, kangaroo, Seal, dog, cat, snake, alligator and turtle come to a certain extent. Since the BSE scandal, where many no longer dare to eat beef, ostrich meat, there are also with us. Some shrewd farmer, they had flown them in from Australia, to offer ostrich meat as an alternative to beef. A few courageous giant birds are then running away, jumped from the truck or slipped through the fences. They have amazingly well adapted to our climate and propagated. A few loner living in the northern state of Schleswig Holstein in happy harmony with deer and hare. The others have come together in a ” herd ” and feel good in Meckpom at the Mürtiz as well. Germany after China and the US, the third largest meat producer in the world. With the increasing prosperity, especially in emerging markets such as Brazil meat consumption is immense. With us after the many meat scandals rather a stagnation or decline in meat consumption is recorded. It is hoped that the consumer back reflects on quality and appreciation of animal product, that is, away from mass production.

per head -to-eat meat in Germany Foto: Infographik made by the “Welt” 2013
Circle: – the dark blue colour: pigs /- the light blue colour: cattle and calfs /- black is poultry

According to the species is spoken by a particular type of meat and meat depending on the used part of the meat. As a rough general classification is referred to as red meat for beef and veal, pork, mutton and lamb and white meat of poultry and farmed rabbits. Red goat, rabbit and horse meat is not so frequently eaten with us. 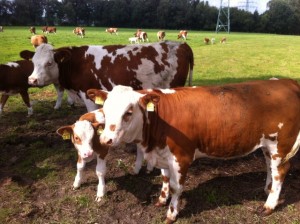 The term “beef” means all races regardless of their gender or their age. The meats are totally different in their characteristics:

Bull meat          – called uncastrated male bovine animals, whether bulls, bullocks or Fasel
– Bulls is called from 2 years,
– Slaughter at between 14 to 22 months, it is young bull meat
– The animals are bred mainly in intensive fattening stable
– Relatively low-fat, light to dark red flesh of moderate to vigorous fiber structure

Veal                     – female and male animals
– Slaughter at the age of 5-6 months with a weight of about 200 kg
– Low-fat, close-grained, very delicate, light pink to bright red meat
The color of veal depends on the feeding. Were eaten properly grass lot in the pasture and have the calves, then their meat is darker because the healthy green food contains a lot of iron. Calves are raised in intensive farming in the stables provide more white meat.
The meat quality is mainly dependent on the age of the animals from the race, farming and feeding. A distinction (eg, Jersey cattle) and meat breeds (Galloway, Ansgusrind) between milk. In addition, there is our dual-purpose breeds, the red or dusky, stain and Brown Swiss.
What is sold to us comes mostly from two-year cattles. Senior man used for sausages or for making broths.
There are three methods of rearing or fattening forms: factory farming, the pure pasture and grazing in combination with supplementary feeding.
Each animal has two buttons in the ear for: – the reference number of the beast
– Information on -born in … fattened slaughtered in … in … decomposed into …
– The European slaughterhouse number (ES no.)
– The European butcher number (SR–no.)
Pork 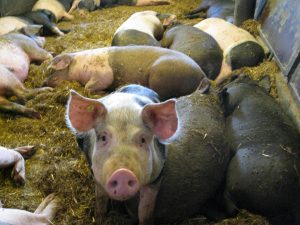 This includes all types of meat from domestic pigs of different sex and age. Piglets are young animals still drinking milk. Suckling pigs are taken and slaughtered at least six weeks from the mother’s breast. Are no longer nursing pups hot runner. an
Sow is a female offspring had before. In the male pigs there are three different methods: the early castrated, after three to four weeks, they are called Borg. Then there is the boar that are not neutered but used for breeding. Boar meat has a strong rumor. Therefore, they are castrated at least eight weeks before the slaughter.
Pork is in high demand. The poor bastards therefore be mass produced and mostly slaughtered already 7-8 months. Today you have a lower fat content than before. The meat quality is not only the food, race and he determined attitude, it also depends on the stress resistance of animals at slaughter. Pork is pink, tender and has a fibrillar structure. At slaughter it has a weight from 90 to 120 kg. One half is sold as fresh meat, the other further processed for sausage.
Sheep and lamb 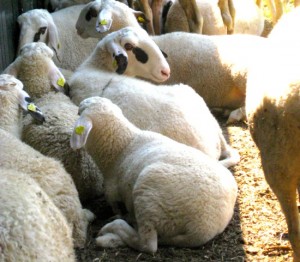 Lamb is compared to sheep meat more tender and it has a higher meat and less fat. We mainly eat lamb. The meat is fine grained and spicy taste.In the past, sheep were kept mainly for their wool. The classification of the breeds therefore usually occurs at  their outer coat properties. There are, for example, black, white, and blue-headed meat sheep. Only Günter Fielmann breeds the old breed of sheep glasses, originally from Austria.
poultry
All bred birds are kept as livestock, and are intended for consumption, belong to “poultry“. T 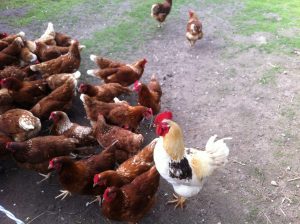 hese are chickens, geese, turkeys, turkeys, ducks and pigeons. This includes geese and ducks for poultry fat, while chicken and turkey with lean poultry.  Earlier chickens were kept mainly because of the eggs, the meat was a by-product. Today it either raises chickens for meat or egg production. The poor poultry is kept mainly in industrial fattening or battery hens and ekes doing a predominantly unpleasant existence. The meat maturation is complete after just 24 in poultry. The meat color and texture differs depending on the breed, age and sex. Chickens and turkeys have white meat, ducks and geese rather darker. In this case, the breast meat rather brighter and the hind legs is darker. The meat is tender and the females of males slightly stronger. In broilers, the differences mix.
game 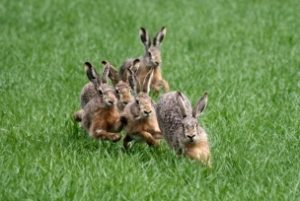 Venison is the generic term for hair, feather and game birds. Wild Hair denoted hunted fur-bearing mammals.
This includes on the one hand the big game with deer, deer, chamois u. Moose, and the other is the wild, so wild boar and small game with hares and rabbits.
Germany is one of the richest game areas in Europe. Wild meat comes mostly from the Hunting killed, wild animals. When the animals may be hunted depends on the animal species and is written firmly into the hunting laws of the countries.
Deviating from the gate Wild is killed. From a purely economic reasons, it is kept in natural enclosures, fed and controlled. This meat is mostly fat and tastes different than that of wild animals. More generally, game meat is low in fat, close-grained, ranging from red to red-brown color and firm consistency.
The taste is very different depending on species. The meat of hunted during the mating season male ungulates (hoofed animals), by the sexual messengers have a strong urine smell and taste, but can lose during prolonged storage in the freezer itself.
Game birds are all wild birds that are hunted for human consumption. Among the most important wildfowl species: wild duck, wild goose, wild pigeon, pheasant, partridge and guinea fowl and quail. The snipe is one of the big game. The meat from wild game birds is firmer and more aromatic than the out of the aviary.

Reproduction periods and carcass weight of different types of poultry

To prepare the venison is usually inserted in buttermilk or red wine, the pickled intense game taste something away and softens the taste. The meat maturation in wild game takes 1/2 to 4 days on average 1. The meat of hunted by stalking wild is usually more tender and more delicate than that on the hunt killed game. Through the hunting–stress missing the wild partially sufficient glycogen (used to provide glucose) for meat maturation.