Sow in pig may go out… 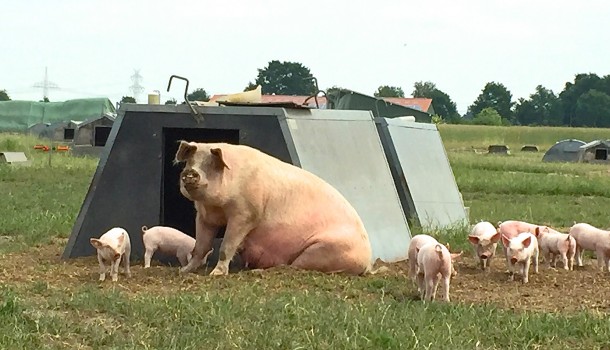 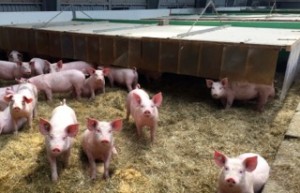 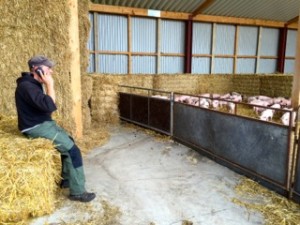 She is one of 450 sows enjoying her freedom on a greenfield site, while her “little rascals” raging around. The sows from Christoph W. are allowed into outdoor enclosure a week before their farrowing date. From then on they spend 40 days frolicking with their piglets on the meadow. Just as long as their suckle-time lasts in this ecological pig-breeding-farm. In the conventional attitude the piglets are already after 21 – 28 days deducted from their mothers. “The transition from breast milk to feed is a difficult phase,” says Christoph W.. “The new food can cause diarrhea.” On his farm, the piglets come from the mother first in a sanctuary, where they will be converted under special observation, very relaxed. These are either the double boxes, with 80 brothers and sisters out there, or they come in the roofed barn. There they are safe from the rain. Unfortunately there is not enough room for everyone.

The double boxes are more labor-intensive. When it rains more, it needs more straw refills to put the piglets dry. 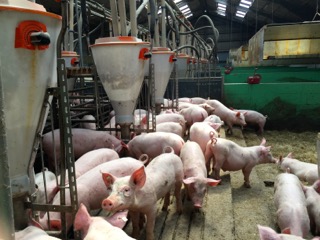 Two months they remain in these “nurseries”, then they will be sold to eco–fattening farms, where they do not conduct their own breeding, such as the Wulksfelde Property next to Hamburg. At that time their weigh is about 30 kg and it often brings in sales 110, – to 120, – €. The pigs that won’t be sold, change into the organic breeding-farm by Christoph W.. There is still plenty of room and they can also get out, romp around just not quite as much as before. At the modern feeding sites Self-service is called for. About three months they stay there, but they are also used in organic farm to slaughter. Whether in conventional or organic agriculture there is no difference, after 160 to a maximum of 195 days it’s finished. The pigs bring then so around 120 kilos.

The pregnant sows come into the waiting bay. While they feed forward, is pushed behind them the manure away, collected outside and tilted as a fertilizer on the fields. On this farm everything is well planned, nothing get’s lost. 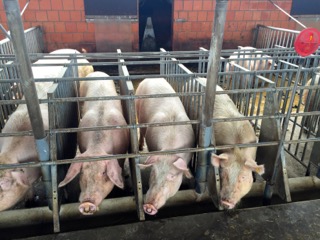 Sows in the Waiting – Stable

Even a couple of sick pigs live here. They come in a special box, where they can relax better than in the general crowd.“This is quite normal. We have about 2% losses and about 2% to take care of with an umbilical hernia or other problems. Of the last group 1% survived. As long as they take food, I let them continue to live, but this is out of profit. But that he quite satisfied. 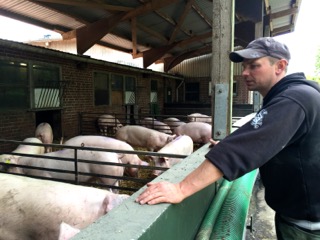 With a permanent stock of 3000 animals on the farm which is no great loss. The animals are hardly sick. “We run a high vaccination effort. Each piglet gets five vaccinations. We prevent by doing that the use of antibiotics against the same. In this case, the antibiotics would be much cheaper, but it’s a Eco-pig-breeding. In conventional farming you get not paid for this.” On this farm, the pigs are hardly sick because of the free range.

Since he was a kid Christoph W. wanted to be a farmer. 1999 was finally over; the lease ran out and the family farm was back in the familys hant to be farmed. With 100 sows in free range, he began because there was no money for a new barn. For the pigs this was naturally great. Christoph W. also liked it. In 2007, he even rose from conventional pig farming to organic production in order: “That was then a purely economic reason and the effort has been limited: the change in food and the spouts had to be re-prepared, both together for about 100,000, – Euros. Then I got a lot more money for my pigs. At that time, after all, a difference of about 40 DM per animal, “says Christoph W.. The pig line he changed and increased from DanBred sows to on Hypor. Both are called Hybrid breeding lines with targeted crossing methods try the efficiency of sows to increase.

That is exaggerated in some ways. Some sows are so highly cultivated that they give birth to 34 piglets per 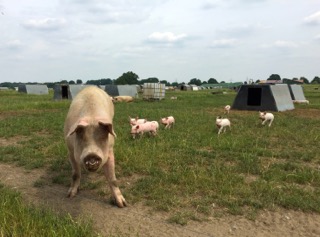 litter. They have only 16 teats, so they are made for 16 piglets. This enormous litter sizes are difficult for most of the sows to cope with. Their uterus is not applied to such a capacity. Others have problems with their bone structure which can not cope with the more than rapid weight gain. “The Hyporsows are robust and smoothly,” explains W.. “That means, they have good mothering ability.” Once he has reassembled, through the purchase of Hypor sows, he wants to breed with crosses between German Landrace and German noble pig his mother sows itself. 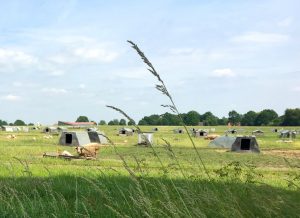 Much larger is not possible, because of the surface boundary and he is already a “mass breeder”. He only doesn’t like to hear that. Too often it lacks in the reporting of touch with reality, he thinks: “Mass production must not be negative. It is just practical. We order the supplementary feed only per truck platoons. Because I save per sow per year already 60 to 70 €. Also the sperm or the vaccine shopping I save significantly through the crowd.” On 80 ha (1 acre = 0,4 hectare) live at least 3000 animals, including the 450 sows. The sows occupy 160 huts, turn on 24 hectares, that is, they are alternately on 8 ha. Always in April all cabins change to another meadow. At high temperatures in Summer W. pulls up in the huts, the rear wall, so that the animals get through the natural ventilation a slightly cooling. Depending on requirements, water is also distributed when the potions are frozen in winter, or when it gets too hot in the summer. 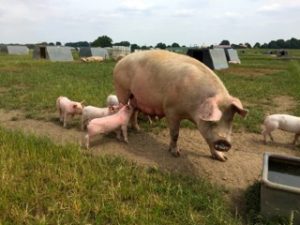 Fields are amazing green because the animals wear nose rings. “As a result, they do not dig so hot, that’s important, because in winter they might otherwise violate their claws on the craggy ground. In addition, the sows like form hollows. When the piglets roll in them and the sow lies down on top of them, she could crush the little ones.” This kind to prevent the natural rooting of pigs with nose rings is an ancient tradition. But in recent years it was subject to increasingly criticism. “This is no more than welfare. The free range with the nose ring is so just in a state of flux,” explained Dipl. Ing. Agr. Ulrich Ebert from the competence center for organic farming. The danger for the piglets one would have just check with more frequent inspections in the huts, he says. That would bring the stringent time management operation first mess. In 14 days the rhythm sows are inseminated, vaccinated piglets, pregnant sows laid out, etc., always of 40 pigs.

The area looks like a campsite for sows. It is divided into plots through wire. Since the piglets slip while 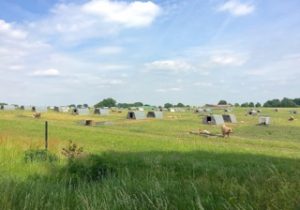 back and forth, but the sows show solid huts. “Otherwise, I lose control ,” says W. . The whole free range is also enclosed by a wildlife fence; to again double fencing within the wildlife fence. So the animals are protected from contact with wild pigs or other animals, if necessary. Epidemics could transfer from the outside. On the whole operation it looks not look like a factory farming company. In all barns, the animals have plenty of space and always litter. The pigs look clean and act very vivid. It is one of the unfortunately rather rare even outdoor entertainment pig-organic farms. In approximately 9000 piglets are brought into the world here. Christoph W. manages the farm together with his brother and another employee. “We are, I believe, one of the five largest companies in Germany,” says Christoph W..

This is not like a zoo to pet the animals, this is a kind of a mass production of pig meat. They produce a lot with a lot more effort, but the pigs and pigletsare grown up much better than in conventional “mass operations” and the quality is also very different. It’s said, that this way of breeding pigs outide is coming from the United Kingdom. 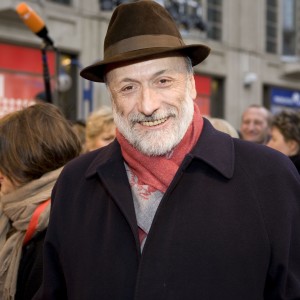 The Founder of "Slow Food", President Carlo Petrini concurs with papal encyclical calls for a change in life, production...
Copyright 2014 Ruth Schalk
Back to top