Bunde Wischen – a dream for savage 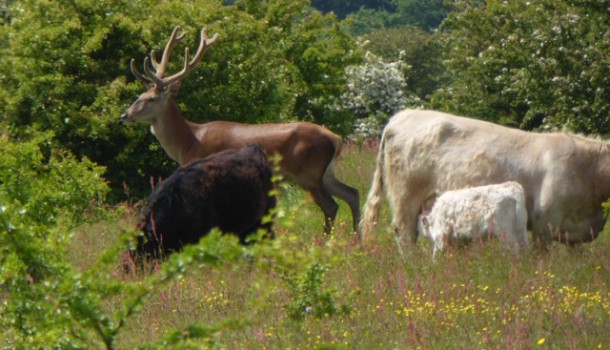 At the Farm “Bunde Wischen” everyone has space, pleasant plenty of space for cattle. Normal expects to approximately 0.7 hectares per cattle, that’s what it needs to be able to support itself. 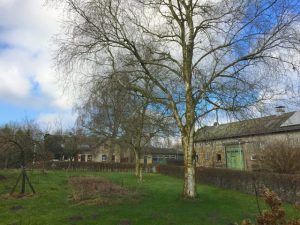 Bunde Wischen provides them more. There are even a beautiful spacious grounds on the farm. Behind the main house some cute pigs are running around. They are in a very good mood. Curious like normal pigs are, they come running along, sniffing, then putting their noses back in the muck, it is sooo interesting in there, purely exiting. On the pasture behind graze a few horses, so-called Koniks. These animals are from the Netherlands. Compared to the others, they have a complete different feeding behavior. Due to their different behavior, the various animals provide greater structural diversity and hence for more biodiversity and biodiversity. The land for the cattle is farther away. On about 1500 ha, the cattle has the opportunity to enjoy a free choice there. Even cattle have preferences and like to decide whom they are standing t 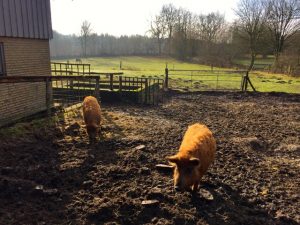 ogether with, when they want to go somewhere, where they graze, if the dark bull might even admits to a flirtation with the “blond heifer” (young female cattle), or rather he watches what the rest of his troop is doing. The animals live year round in the herd on pasture, so bulls, steers, calves, heifers, cows all together, which is very special. Eventually, of course also this hat to become an end. One might indeed a healthy herd without inbreeding, so the older animal come on an extra pasture after some time, for observation for about a year. This is to prevent pregnant cows slaughtered. From this pasture is then fetches the selected cattle for slaughter. Each week four to six of them lose their lives, it is ultimately for an agricultural holding. The slaughter on Bunde Wischen via the grazing shot, is the most humane method of killing a cow, if you do it right. In Bunde Wischen only trained employees put the gun to the last shot of, or the householder, Gerd Kämmer himself:

For this type of slaughter Germen Farmer, Ernst Hermann Maier, fought for years against the policy, against the state, against the Company, but he won and founded Uria. One method which is becoming increasingly popular because it has a future. Just think it over, how much energy such a mega slaughterhouse consumes, day and night, and how terrible it must be for most of the animals there, usually full of fear, while they’re losing their life.

The fight for Maier is not over yet. At the moment he fights against the earmarks, Maier wants to stay with his chips. 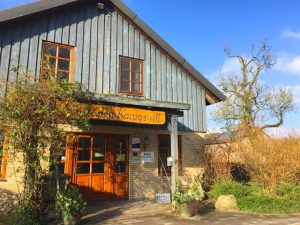 Gerd Kämmer stunned the calves with the blowgun before he sets the eartags. “Within the first seven days these fairly thick identifying things, according to the EU Regulation, have to get pressed into the animals in the sensitive ears. That is the embossing phase, this bad experience the calves will never forgive me,” says Gerd Kammer. “Even the mother of the calf and the whole bystanders flock not.” All this unspeakable stress avoids Kämmer with the blowpipe method.

30 years ago, with the creation of Bunde Wischen that looked quite different. A few members of the BUND tried to maintain three Galloway’s an orchid meadow. That worked well. The project performed well and now it continues works as a non-profit association, only much larger, with about 800 wild, shaggy and now naturalized British, a few Highlanders, some sheep, wool pigs etc. Link: Bunde Wischen
Since 2012 Bunde Wischen e.V. belongs to the network of “demonstration farms for organic farming“. A visit to these establishments is welcome and worthwhile! Link to map:
Eco Demonstration Farms Germany 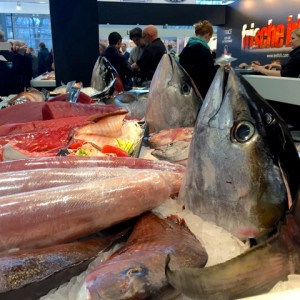 Almost like a Fish fashion show  the exhibitors present the noble sea creatures in their partly scaly "Dress", such as the two red snapper,...
Copyright 2014 Ruth Schalk
Back to top