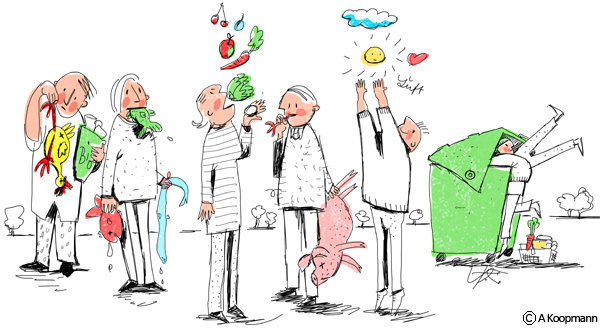 Flexitarians , Freegans , Pescetarians – who eats what?

Other types of diets have always existed, such as on Fridays not to eat meat in Catholicism, not eating pork in Islam, to eat only kosher food in the Jewish faith*, etc .. Sometimes these rules were actually useful or arose as a consequence of lean times and regions. Chernobyl, BSE and Bio-lies bring gooders, health advocates and other consumers to partly idiosyncratic behaviors, especially in the industrialized countries. Add to that the progressive aging of the population. The average is getting older, but want to stay fit and look natural as young as possible. Diet plays a major role, is for many an even philosophy. All good, as long as the diet does not lead to deficiency.

* kosher meat: in the Torah it’s applied, that only those animals are considered to be kosher, when they have split hooves and ruminants (such as cattle, sheep, goats, deer etc). But pork is considered treife, it is not kosher because although pigs have split hooves, they don’t ruminate. Meat and dairy products are never eaten together.

All Eaters or Reckless meat eaters

Land of milk and honey, which is a privilege of the people, basically we’re able to eat everything. Our diet is rich filled with an oversized range of plant and animal foods of all kinds. All food is just great, if you do not eat too much fast food, avoiding too many simple sugars and animal fats, regularly eat fruits and vegetables and ensure enough fiber. Then you don’t need to worry. The risk of developing metabolic disorders, obesity and other nutrition impact is mostly under control. But now you will probably become as old as the hills. This is a problem, how should the immensely growing world population be fed without using up all the resources ? So many animals we can no longer produce in the future when all remain omnivores. Increasing allergies to force a change in diet in addition to those affected. Religious or ethical moral considerations lead to a different eating habits and of course the reason.

60 kg of meat consumed every German average 2012. 85 percent of Germans ate daily or almost daily meat and. At the expense of the environment, climate , health, and of course at the expense of the animals. All read in the flesh Atlas 2014 , a disillusioned report to have the Heinrich Böll Foundation, the Association for Nature and Nature Conservation (BUND) and the monthly newspaper Le Monde Diplomatique published in January.

This new trend in unprocessed foods, is with those cooked fresh to take possible “pure” food for themselves. Products with Clean Labels, denote foods which “no promises” are sold. Such “clean” labels some nutrition experts claim as a simply clever marketing gimmick. The aim of the new nutritional concept is to eat many fresh, natural foods, and cook healthy rather than eat the comfortable convenience products. Fast food and fish fingers are frowned upon, Fresh Food every time!

Flexitarians , these are the food types of the future, they say. Almost 12 percent of Germans are already known as Flexitarians  This resulted in a meat consumption study at the Universities of Hohenheim and Göttingen. You eat meat, but in moderation and then mainly organic quality, less, but better! More and more German people create a conscious of meat-free days. Partly for health reasons, partly to soothe their conscience, for the production of meat in masses is just cruel. Jokingly, they are also called part-time vegetarians. Flexitarians assembled, the buzzword is made ​​flexible and vegetarians. It dates from the 90’s and is as it should be different from the United States, by Helga Morath. The restaurateur tried to explain the order, your normal American standards, sparingly stocked with meat menu restaurants. If it is true then Morath thus has the Flexitarismus- trend triggered on. ” The result : Especially the gastronomy is strongly oriented toward this Foodtypus for the future,” Hanni Rützler writes in ” Food Report 2015″ .

A foodie is a gourmet, or a person who has an ardent or refined interest in food and alcoholic beverages. A foodie seeks new food experiences as a hobby rather than simply eating out of convenience or hunger. Foodies are a distinct hobbyist group. Typical foodie interests and activities include the food industry, wineries and wine tasting, breweries and beer sampling, food science, following restaurant openings and closings and occasionally reopenings, food fads, health and nutrition, cooking classes, culinary tourism and so on. A foodie might develop a particular interest in a specific item, such as the best egg cream or burrito. Many publications have food collums that cater to foodies and many of the websites carrying the name foodie have become popular amongst the foodies. Interest by foodies in the 1980s and 1990s gave rise to the food network and other specialized food programming, popular films and television shows about food such as Top Chef, a renaissance in specialized cookbooks, specialized periodicals such as Gourmet Magazine and Cook’s Illustrated, growing popularity of farmer’s market food-oriented websites like Zagat’s and Yelp, publishing and reading food blogs, specialized kitchenware stores like Williams-Sonoma and Sur-la-Table, and the institution of the celebrity chef (Source, Wiki, The Edible Atlas by Mina Holland)

Freegans are politically motivated. They basically eat everything, but the food was not acquired commercially, so it does not come from the trade. Freegans are activists who feed from donated, home-grown or products found. They want to draw attention to the consumer behavior of others and on poverty.

Frutarian feed primarily on plant products. But they don’t want the plants suffer through it. So the plant from which the fruit, nuts and seeds originate should not be damaged. A group of Frutaner only eats the fruit, which has already fallen from the tree. They are often run by religious, ethical or spiritual motivations. Frutarian run the risk to one side to feed because they do not provide daily zinc, calcium, iron, vitamin B12, protein and iodine.

This describes persons who prefer to eat locally-produced food.

Lifestyles of Health and Sustainability, referres to people who maintain a lifestyle that is marked by health awareness, preparedness and the orientation to principles of sustainability. Most of them are people with higher to very high income. LOHAS consumers are, for example, nature and outdoor leisure, health food stores or organic supermarkets customers. Their motives are similar to those of the Slow Food movement.
In the US the phenomenon appeared first in 2000, was first described by the sociologist Paul Ray, in his popular book “The Cultural Creatives, How 50 Million Are Changing The World”.
Some critics appear to link high-quality consumer questionable sustainability. Some traditional environmentalists see it as just another attempt by consumerism. Others, such as the cultural scientist Nico Stehr however praise the new power of “moralists” and the well-connected, global trend, which could put pressure on the industry through conscious consumption and renunciation.
As a further subgroup of the Lohas, the PARKOS emerging (Participatory consumers). PARKOS are LOHAS who actively use the Internet.

Effects on health: According to the results of 21-year ongoing study of the German Cancer Research Center, a vegetarian diet has little effect positive on on the mortality risk. The scientists compared the data with subjects who consume meat from time to time. Professor Jenny Chang- Claude, director of the study , said: “However, the two groups differed significantly due to their overall very health-conscious lifestyle of the general population.” Allegedly are Prince, Boris Becker and Brad Pitt are vegetarians.

Usually vegetarians suffer from severe vitamin B12 deficiency, so the nutrition expert Dr. Matthias Riedl. This deficiency may result in serious nerve damage, if it is not discovered in time, because vitamin B 12 the protective fibers supplied by the nerves. Without this Vitamin they recede. The shortage is felt by a tingling sensation in the limbs, lack of concentration, mood swings, chronic gastritis … (Source: NDR visit 17/02/2015)

Pesce ‘s fish in Italian and as the name suggests, Pescetarier mainly eat fish. The meat of warm-blooded animals, however, they renounce all, which is why many of them are among the vegetarians. At the “real” vegetarians the great debate heats up by this aspect. Pescetarier are known as ovo- lacto- Pesco -Vegetarian : No meat, eggs, milk and fish are however allowed. Who actually may describe as vegetarians and those who do not is debatable.

The fact is that more and more people do not eat meat; partly for ethical or religious reasons , because you simply do not like meat or for health reasons. Pescetariern eat for ethical reasons, no animals, find eating fish but reasonable and some may just prefer to fish.

You are what you eat, on say, only in this case, it is ironic; the so-called “pudding vegetarian” see absolutely not wobbly like a pudding. They refuse to eat animal products, so that no animal is harmed. Vitamins, fiber, minerals and other essential nutrients they have not in sight; Therefore, eat very one-sided and often seem slim.

No meat, no eggs, no dairy, no honey called it, for hardcore vegans. Also garments made ​​from fur, leather or wool, drugs or other products combine animal substances in themselves, they reject sometimes. Vegans are the most consistent proponents of animal rights group . Many also do not go to the zoo, in circuses with animals or have pets. Sinéad O’Connor to eat vegan.

The representatives of the raw food feed primarily or exclusively of uncooked plants, partly animal foods. Foods that have been produced by elevated temperature , such as Dried fruits, honey, cold pressed oils, dried meats, certain nuts they eat. Cold smoked food, acetate or lactate vegetables are also covered. Raw food assume that prolonged heating destroys important substances such as vitamin C or unsaturated fatty acids in foods. But even here, Attention, often lack the varied and balanced diet with pure raw food diet so that it can lead to nutritional deficiencies. Pure raw foodists do without, for example, cooked legumes, which are rich in proteins. 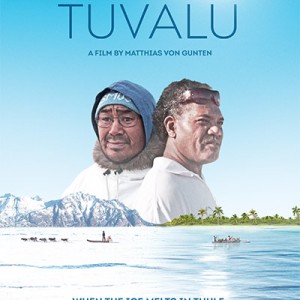 Two places at the edge of our planet are causing headlines due to climet change: Thule, Greenland, because of record ice melts...
Copyright 2014 Ruth Schalk
Back to top