Gastón Acurio, one of the fifty 2016 – ambassador of peruvian cuisine

Gastón cooks not just for fun, he cooks out of passion and for Peru. Gastón Acurio is Peruvian with body and soul. With his cooking

and his creations he raised the richness of Peruvian cuisine,

which dozed a little over the years, back to life. It’s amazing, but he cooks the image of an entire country high and raises the self-esteem of the Peruvian farmers and fishermen. He is recognized as a national hero and internationally as one of the most outstanding chefs in his home. Nearly 20 years he spoiled, together with his wife in Madrid, the Spaniards, then they have returned to Lima. His restaurant, Astrid y Gastón, is currently among the world’s 50 best restaurants, at the moment he is in 14th place.

The german documentary “Gastons Küche” takes one into the world of a serious but fun-loving connoisseur. A beautiful story, full appreciation of the nature, the food and the natural manufacturer, a world full of diversity of Peruvian food and spices. Acurio

processes them with imaginative recipes for delicious dishes, always in close and sustained contact with the local farmers of his homecountry. He seduced his Peruvian colleagues to buy their products from regional producers and built this remarkable network, which he combines with haute cuisine in producing population directly, and it works well. Maybe this is generally a good idea …  Acurio also operates a fantastic cooking school, a school of hope for all people in Peru with a good tongue feeling.

The star chef-cook is also on his travels to the capitals of the world, which may have great significance and impact of the consumption of original food. If it was up to his parents, then Gastón Acurio had struck a legal career and would tradtionell entered into the political footsteps of his father. “My father went to his work as a politician, and my mother was fully occupied with my sisters and educate me. We had a maid called Juana. She cooked just as reluctant as the rest of the family. But to her tasks belong to give us a lunch for school: the result was not always satisfactory and so I discovered – a voracious little boy – the old French cookbooks that slumbered forgotten in our closet. These books awakened at an early age, the passion for cooking in me “… Acurio developed his passion in secret, behind the backs of his parents he cooked his own so said “soup”. The traditional cuisine of his homeland, which likes to use a lot of fresh fish, as in the classic “ceviche”, a traditional dish with fish, skinned and boned, Acurio has remained ever faithful. 500 authentic recipes has Acurio now compiled in a cookbook, Peru – The Cookbook. His work is an exotic reading and cooking pleasure and an enjoyable journey into an exciting culinary world. And you can easily slip in his life while watching the DVD “Gastons Küche” 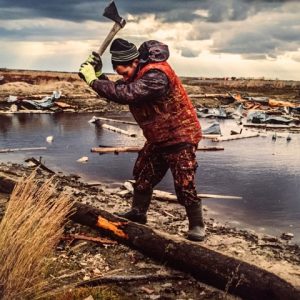 Set in the middle of the abandoned waste of oil, Dima Artejew smashes wood. Around him the water is dirty....
Copyright 2014 Ruth Schalk
Back to top