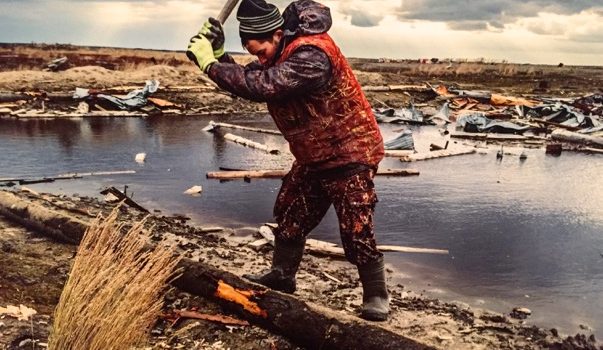 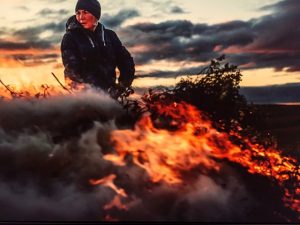 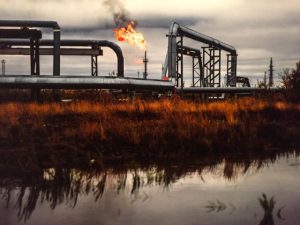 Set in the middle of the abandoned waste of oil, Dima Artejew smashes wood. Around him the water is dirty. Artejew belongs to the Komi-Ishemzen, the nomadic reindeer herders of Russia. They live near the Arctic Circle in the Tundra. Their grazing lands are contaminated by the expansive oil production companys. Leaks on pipelines and uncleared garbage pollutes the drinking water and threatens the traditional way of life of the Komi. For about two weeks the photographer Dimitrij Leitschuk accompanied the Artejew family in their daily lives. “Considering the fragile nature and the quality of life of the Komi, the oil industry shows no respect at all,” Dimitrij Leitschuk describes the local conditions. “The many metal scrap, waste and broken glass causes infections and stunted legs at the reindeer. The water is contaminated by the oil.” Out of necessity, 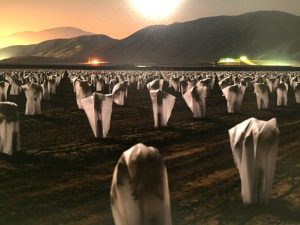 the family then kills their animals. Dima eating a piece of kidney from a reindeer that he just had to kill – the animal was too badly injured. Normally he woud have sold it. With the destruction of nature, he and his people lose more and more of their livelihood.

Leitschuk had trouble getting his picture material out of the country. He says, the KGB had pursued him and removed his pictures. In wise presentiment he made copies and which were rescued with the help of friends. “If in Russia anything is not good, then it is pushed to the west. The photos show the reality, but there is also in Russia a green movement now,” tells Leitschuk. He lives in Hamburg.

Uwe H. Martin documented the effects of years of unusual drought in the western US. The aridity hits the agricultural industry particularly hard, since it is not based on the sustainable management of the country, but on an industrial exploitation. The almond trees need as much water, too much to deliver good returns. The recordings are the fifth part of his international Repro days project “Landrush”, which he realized together with Frauke Huber, about the social and environmental impacts of modern agriculture. The exhibition offers a subset of the collected information, transported crossmedial by I-pads, videos and photos. “It would last about 2 hours to laook at everything, the spectators can themselves become the reporters and form their own opinions,” says Martin. The Süddeutsche Zeitung has published the Landrush project together with an interesting photographic report, under “To the last drop”. 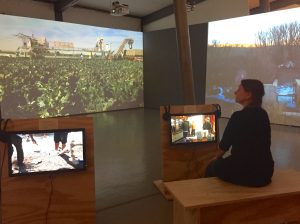 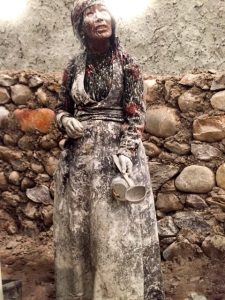 The third in the league, the Swiss photographer Manuel Bauer, was in Nepal go. He documented over the years as the Nepalese village Sam Dzong formally the water is dug.

Bauer accompanied the residents while their fields, due to global warming, withered. The 85 residents had to move bag and baggage to a neighboring valley in the Himalayas; they had no other chance. Last year, the new houses could be based. This was made possible only through the donations that Manuel Bauer gathered at this time with the help of his photographs.

Nepal, northern Russia, the United States – in these three countries, the winners of 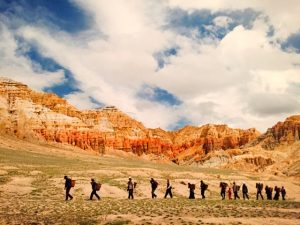 The three photographers present their photos about the profound consequences of water shortages and ecological exploitation of the everyday life of people may have. The three project ideas were selected in 2014 by the jury of Greenpeace Photo Awards and realized last summer by the photographer. With the prize money, the projects were realized: “They were an important aspect of being able to finance this journalism at all,” said Martin, of its comprehensive

Photojournalism with collaborations with magazines, foundations and the film promotion to life. “This allows me more freedom and I am no longer dependent on the gatekeepers in newsrooms,” says Martin. In addition, the media stood the funds of the past since the media crisis no longer available. Editors are often no longer to entrust such projects capable, but are important for comprehensive information of consumers. 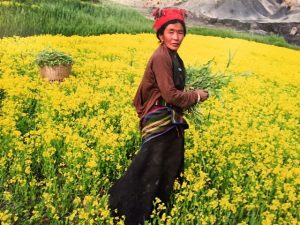 Greenpeace and the Museum of Work in Hamburg to introduce the photo coverage for the first time in a joint exhibition, which is accompanied by interesting lectures. 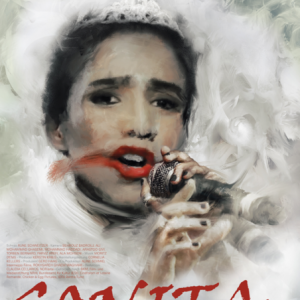 As a little girl Sonita flees together with her family from the Taliban from Afghanistan to Iran. After some time her family...
Copyright 2014 Ruth Schalk
Back to top