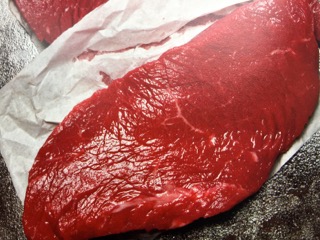 In Germany it’s called “Hüftsteak” because it is a cut from the hip, which is called “Hüfte” in Germany. Just some title it as a Huftsteak. May be the american started to call it simply “Huftsteak”, as they don’t have such quotation marks above the “u”. It’s all a bit different: in Austria they call it “Hüftscherzel”, in the US “Sirloin Butt” (you should know that maybe of Jennifer Lopez, her nickname is “the Butt”), in Italy “Scamone”, in Spain “Bistec de Cadera” and british people call it a”hip-bone steak”.

The hip is a section of the leg of beef. The rump is the Cap Of Rump. The Cap Of Rump is also boiled beef because of its characteristic, flat pointed tip. This meat without cover is also called flower or rose. This floristic descriptions can already suspect that this meat of the  hip is the most delicate and finest stretch meat of the haunch. For braising and cooking it is too fine, but it will also gladly prepared as a roast beef. For quick roasting of the butcher cuts, the steak from the leg is mostly 2-3 cm thick slices, approximately 150- 250g.

This piece of meat is characterized by relatively short meat fibers and a slight marbling. It is a typical peace for short grilling. By roasting or cooking it too long, at just over 60 degrees, it will dry quickly. “Under no circumstances continue to cook as medium rare with a maximum of 52 to 57 degrees,” says Jan Spielhagen, the chief editor of the Meatmagazine BEEF. Dry aging is not necessary here, but a wet maturation of 3 weeks should have brought it as a decent steak behind it. The meat is then delicate. In the supermarket this quality of course is not to be found.

A steak is considerably cheaper than a premium cut. It tastes a little stronger than a fillet steak. The meat comes from a dairy cow, a breed for milk production, than the mainly served meat is rather unimpressive. His finer taste depends on the breed of cattle, meat from which it originates. A steak from Charolais Beefs tastes of course unlike a piece of Galloway. A little taste of the appeal is also directed to the feed and pasture attitude.

In Switzerland it is often referred to as Huftsteak, without “u” on the menu. This supposedly more elegant notation is often assumed by some of the gastronomes. Jan Spielhagen says, this is only on purpose to charge € 5 more expensive to sell.

Photo: a photo excerpt from the book BEEF master pieces for men, the photographer was not called 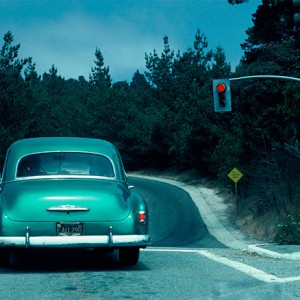 Photo by Goetz Mueller Today, on June 2nd 2015, the FLO PETERS GALLERY opens her charity exhibition for the benefit of the Hamburg...
Copyright 2014 Ruth Schalk
Back to top