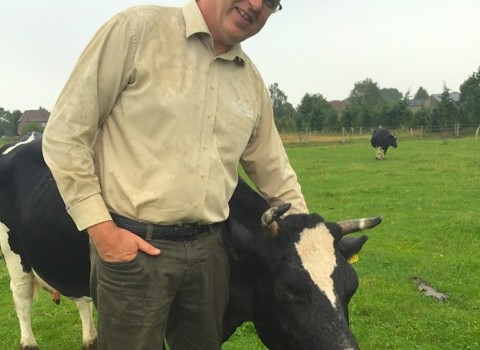 Right in the middle of the little village Lentfoerden, in Schleswig-Holstein near Hamburg, you’ll find the farm of Anette and Hans Moeller. Hans Moeller has grown up there. Since 4 generations his family has been tending the land and trying to get the best out of it. Hans orientates increasingly on the knowledge of his ancestors: 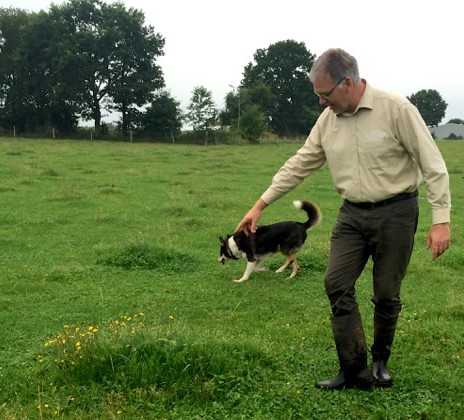 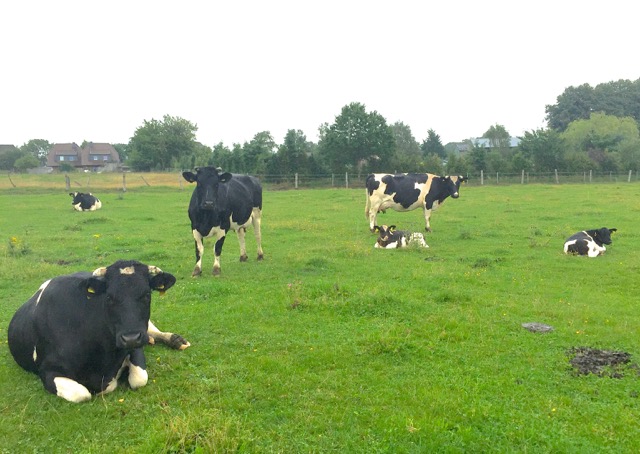 rooks here who take the maggots from the cow dung. That’s how they loosen it, so the oxygen comes to the soil, the grass can grow through and there are wonderful, so-called rank patches.” Soils are assessed in Germany to bottom scores in a scale from 1 to 100; 100 soils are the richest. They are also known as Boerde-floors. Of which there are not many in Germany. Hans Moellers floors move around the number 14. So it asks for a lot of care apply to make it continuous grazing as rich as possible: “It is important that the soil is living, so I do not inject Glyphosate. That kills everything! On the black holes you can see that there are earthworms to swing. They loosen the soil, so many different plants are able to grow on this pasture.” The cows like the variety as well, as they spend all year in free range. It’s a dairy herd, 25-30 cows, but only 20-22 are milked. The rest is on maternity leave. It’s a herd of black-colorful lowland cattle. They are considered at risk because the Holstein Friesian outstripped them in milk production. Hans Moeller had formerly HF cattle as well, but he prefers the old breed now. “They do not give as much milk, but they are more resistant. 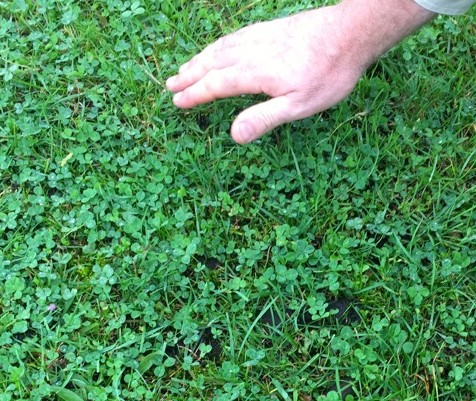 We consciously avoid milk yield for the welfare, the Calves drink sometimes up to 10 liters a day, but since we take the calves with nurses, the vet 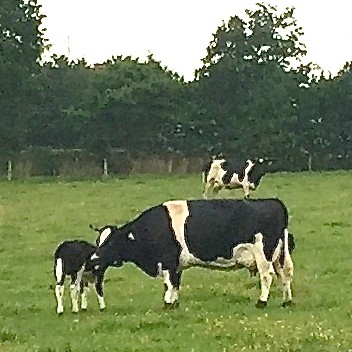 Mausi and her son

comes hardly to us.” For 2 months the Moellers are now even switching to the mother bonded calf rearing. Their matriarch Cow “Mausi” may raise the first time her “son” to the 3rd month all alone. It is the fifth cub, which she gave to the Moellers. Mausi is already 8 years old; so many years live the cows only within an ecological attitude. In the industrial dairy farming most of the animals are ready after 5 years. Then they’re already completely drained and come to the butcher; cows can become over 20 years old with good care. Moellers cows are really doing well. They’re are allowed to keep their horns. “This encourages a healthy social behavior,” says Hans Moeller. Gerret, the bull, stands on the pasture and ensures tranquility. He makes sure that all behave properly and he makes sure that no danger threatens. In between the calves romp around. From their mothers they learn early on how they have to behave in the herd, and also how to graze as they take other tidbits about themselves. Weaning from the mother and habituation to humans Hans Moeller pampered them from time to time with a little bit of Oat and faba beans. The rest of the herd gets a monthly approximately 20 kilograms of minerals from the leak bucket and from June on, he feeds them 2x daily in addition with homemade hay. “Silage is too acidic. Cows have sensitive stomachs, when the PH levels in feed are too high, they will quickly get sick. In addition, the milk tastes better.” Of course, he also saves a lot, because he has not to buy any concentrated feed for them. The milk from horned cows should also be healthier, because it contains more minerals. 2012, Moeller bought along with some other farmers, the dairy “Horst”. A great action with which they have the dairy industry hit by a trick. He and the other farmers wanted 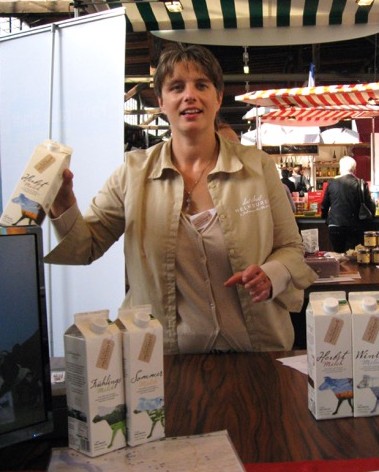 Anette Moeller on a food mess in 2014

their self-determination again, economical wise, without any pressure of the agro-industry. A part of them, named the Oekomelkburen, produce now ecologically pure milk and Yogurt. For their four-year period milk-cans they even get a design award. Milk and yogurt taste 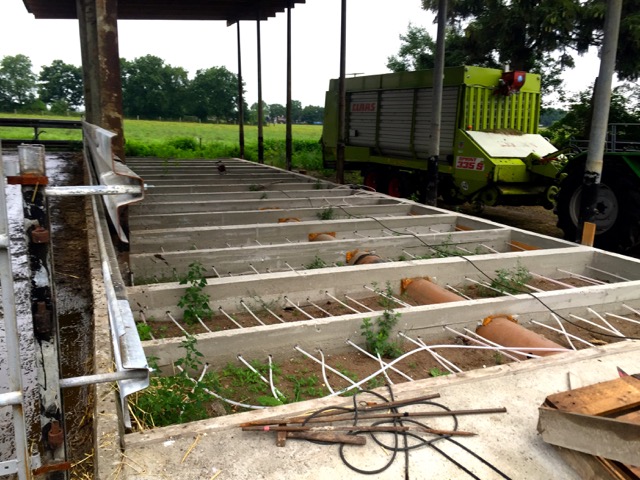 real rich, very creamy! “The milk is pasteurized, it’s heated only to 72 degrees Celsius. This is of course a particular challenge for us. We have to settle faster. This milk is only durable for 10 days if stored, but particularly rich.” According to the lining of the seasons, the milk always tastes a little different. In a cooling tank on the farm it still stands as raw drinking milk, always cooled to 5 degrees. This tastes even richer, but it must be used within 92 hours. Therefore it is entirely natural. “This is a fountain of youth, which renews the cells,” says Hans Moeller. The farm has a broad base. Besides their milk production the Moellers also run a pension, the Ferienhof Moeller (english link). The farmer-couple is patentable. While Anette Möller takes care of the guesthouse, the guests, the farm shop and to the marketing, Hans Moeller fiddles constantly on improvements. “At the moment, just a floor heating system for our hay bales is in work. Then the bales are to be dried over night and in the winter there is straw on it. Then the cows can lay on it and you don’t have to muck so often, as it dries below. As borders he takes old barriers, the slatted floor comes from old factories – a very clever recycling! But the most happy is Mausi, who now is allowed to raise her calves herself, together with her ‘colleagues’. “The largely welfare indoor housing pays off for us, we have significantly fewer side costs than before,” says Hans Möller.

The mother bonded calf rearing may be exercised quite differently. Some farmers allow the calves to go for mornings and evenings to their mothers, some let them drink before milking their mothers drink, others after milking and some even simultaneously. About an hour a day at least the daily to cuddle should last between Cow and calf for nuzzle and learn to know, then the health effects of the calf is guaranteed. Their mothers are much happier and more relaxed. Hans Moeller let them stay the whole day together on the pasture. The separation after 3 months, however, will be a major challenge, since then they have been properly used to each other, and cows are family-oriented, all their lives.
Sources: the Thuenen Institute, Demeter 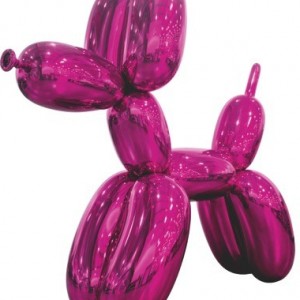 After a world tour that included the Whitney Museum in New York and the Centre Pompidou in Paris, the retrospective is reaching...
Copyright 2014 Ruth Schalk
Back to top