Milk crisis: calves would pay any price for the milk of their mothers … 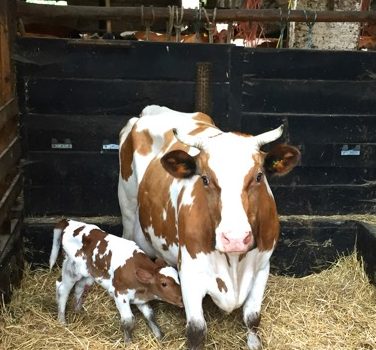 A cow and her calf, the two go together like mother u. Child. That’s also the opinion of german eco-farmer Mechthild Knoesel: 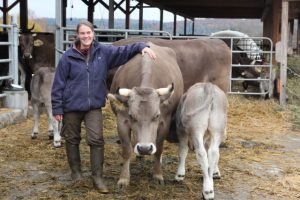 “I wanted to give the cow the relationship with her calf back.” Knoesel is farmer on Hofgut Rengoldshausen, a Farm situated at Lake Constance, with a group of producers with farming and animal husbandry. There she cares about 50 dairy cows and their offspring. The mother bonded calf rearing works for nine years  where she successfully operates. Mechthild Knoesel: “Especially during the first weeks calves are very unstable. Therefore, I let mother and calf stay together for all the time, during the first three weeks of their life. The calf can drink as often and as much as it wants, so it develops as healthy as possible. After the three weeks it is stable, and the cow is allowed to return to the flock for a few hours. The next three months the calf will be allowed to stay twice a day for one hour with the mother. It sucks just ten minutes, then it’s full. And cow and calf have time to cuddle and lick. Then it’s also good again, the gate opens and the cow goes out. “The calves go back 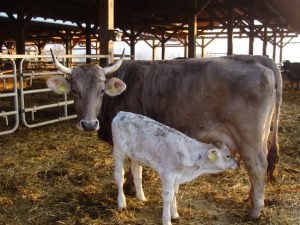 to their” calves- Kindergarden”, and the rest of the milk can be milked, as usual. Mechthild Knoesel: “Always before milking the cows, the calves were left to them. Everything happens in the group. The group is jumbled colorful from the first until the fourth month. Only after four months I separate the calves by gender and age into different groups. The ‘girls’, who came simultaneously with the world, remain together. Later, they also get the same time their first calf, suckle together and get milked together. That’s great! For me, the mother bonded rearing is essential for animal welfare.” The calves show hardly no pain of separation, says Knoesel. “But the pain is for the cows individually. There are cows who suffer silently, others suffer noisy, there is everything in between. The worst that can happen is that a cow is crying out loudly one night. But that is not the rule. And for me is the mother bonded rearing significantly appropriate to the species. Although the mothers suffer for animal welfare short time, I wouldn’t liketo withhold this tie from them. By the mother bonded rearing the circle is closed. The calves that are raised like this, make themselves even better as mother’s. They are quiet, as if they know how it works. Also there is no abrupt separation, they are gradually weaned from each other.” The mother is weaned over five days after the first three months. She can see her calf at this time only once a day. The calf then takes the second meal from a “nurse”. Where the nurse by herself is mother of a calf and this suckling anyway. Mechthild Knoesel: “The own calf of course gets it the best place but another is allowed to drink as well. The calves are from the beginning very flexible and based around. “The calves are less stressed and more active, they are socially competent and learn a lot from their mothers. Unfortunately only few farmers operate the mother bonded rearing. Knoesel thinks it is underexplored: “We know too little about it. When I did my masters work, I have tried some solutions. I had three groups: a nurs- and a mother bonded group and a group that was brought up with the bucket. The result: The growth and health in the mother bonded calves group has topped everything. When raising the bucket, however, there were many health problems, the calves often had diarrhea.” The interview with Mechthild Knoesel is from the World Animal Society WTG.

The dairy industry is in crisis. There is too much milk on the market. Would Knoesels model of mother bonded dairy animal economy improve the situation? For many breeds there are animal welfare guidelines for cattle not. The World Animal Society calls these guidelines for the protection of animals for cattle; in a petition on their side, you can help.

a) The price of milk is in record low – the WTG sums up: 46 cents for a liter of milk currently in German supermarkets. What would be a lot of consumers, drives farmers into ruin. For them just comes half of the sale price – not enough to operate economically. Christian Schmidt has promised on the milk Summit emergency aid* of 100 million euros. The system dairy industry remains untouched: the sick animals that are grown on high-performance, are fed with concentrated feed and are only in the barn belong to the modern dairy industry has long been part of everyday life. Although the farmers have a direct impact on the welfare of their animals, but are in a dependent relationship to dairies, the trade, consumers and finally politics. We all have a responsibility, how are dairy cows in Germany, for an animal-friendly dairy farming can only be achieved with fair prices for farmers. In times of a persistent oversupply of milk at the same time of stagnating global demand, it is a great danger that animal welfare will be the loser without legal rules. WTG Calls: An attitude regulation for dairy cows, anchored the animal-friendly minimum standards for the keeping of the animals by law, primacy of pasture during the growing season, which is the natural movement of the cows need justice. In addition, pasture milk has been shown to be healthier for us, the consumers. Dairies could support animal friendly working farmers and encourage a bonus system, the attitude of robust and healthy dual-purpose breeds instead of disease-prone high-performance cattle financially. Even the Minister of Agriculture recommends a switch to organic farming, which is affected according to him less from the price war. So the surplus could be counteracted milk naturally. At the same time consumers have to be informed to identify a reputable and mandatory labeling, as the animals are kept. World Animal Society e.V., Berlin

b)The Green Party now signalise also a desired change in animal welfare with its recently published “Pact for fair livestock“. It is a political document, but good. It remains to be seen what it is like and when it is going to be implemented.

c) In the Milk Summit recently the Minister of Agriculture, reaching deep into his pocket, he wants to make easy for the dairy farmers 100 million euros – but then what? Would that really long term help farmers out of trouble or the calf back to his mother?
d) Joint Press Release German Watch and Action Farm on 26th of may 16
The overproduction of milk in the EU plunges farmers worldwide into the crisis. The sharp increase observed in Germany and Europe is crucial for the massive oversupply on world markets, which led to the threatening price decline. So the production in the EU has risen by eleven million tonnes since 2011th. Only in Germany, the amount of milk increased in this period by 2.8 million tons. Following the abolition of the milk quota in 2015 the surplus expansion was carried out in particularly large steps. The global demand for milk is not increased to the same extent. “The strategy of the German and European dairy industry to produce more and more milk in the hope of rising exports, has failed a crash for the farmers,” explains Jutta Sundermann of the campaign organization Action agricultural. “The low prices force in Germany and in the EU thousands farms to give up.”  Tobias Reichert of the development and environmental organization German Watch: “In addition to the farmers in this country, farmers in developing countries are severely affected. They look to strong competition from cheap milk imports exposed. So opportunities are destroyed to reduce by milk production local poverty and build regional economic cycles. Instead of “more and cheaper” should “less and better” milk produced. As an entry would have to dairies provide dairy farmers with incentives to reduce their production. In the medium term this should also be accompanied by government support, be linked to a strategy that a enables higher added value and real producer prices. It should be strengthened to provide incentives to produce milk with special quality characteristics such as local and GMO-free feeding, pasture or hay.
Unfortunately, it is not just that our dairy policy makes the cattle aging competition, it is far more extensive. Our high-performance cows need for milk production concentrated feed. This corn, or soy comes to 90% from South America, the United States and Africa and is genetically engineered to turn 90%. Through the milk of these cows that force genetic lining thus enters our food chain. In the producing countries it leads to monocultures and has to often the expulsion to the original terms smallholders result – see Agrokalypse- the day that came the soya.

"Tomorrow" - it could be fantastic... 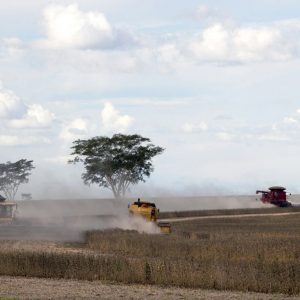 AGROKALYPSE, a documentary about the Brazilian natives and their struggle to survive against the backdrop of rising global...
Copyright 2014 Ruth Schalk
Back to top