Sperm whales are the largest whales with teeth. They can be up to 70 years old and like to live in the composite. 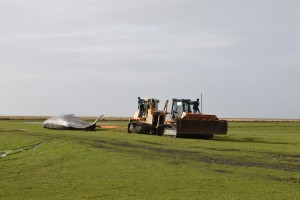 After the mating season the potent young bulls leave their families for a “fat single-vacation” among guys. Their goals are well covered fish buffets north of Scandinavia, they follow the warm Gulf Stream to get there. If they go astray when “snacking” and end up in the shallow waters of the North Sea, then that is their end, says Whale researcher Günther Behrmann in the tv. “If they get stranded they overwhelm themselves with their weight. They simply have no chance anymore to escape the shallow, certain of the tide waters. ” That was but every now and then happens and no cause for alarm, because the stocks have pretty well recovered, he claimed.

Since early January, the sea pushes them on the North Coast of the country; only about 12 sperm whales in the Netherlands and in Lower Saxony, four weeks later now a new herd with 16 junior and senior bulls of whales in Büsum. It is a sad result also for the Minister for the Environment of Schleswig-Holstein, Dr. Robert Habeck: “So many strandings of sperm whales has never been here,” said Habeck on 3rd of February. The Minister wanted to get informions about the rescue concept. “This is was a major challenge and a remarkable logistical feat for the colleagues from LKN, the state Agency for coastal protection,” he said.

About 20 employees of LKN 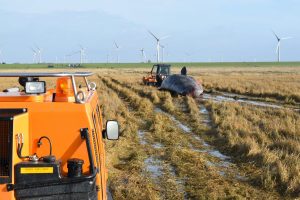 were on site to the up to 15 tons and up to 10 till 20 meter long animals to recover with the help of two tracked vehicles and an excavator. A tug remained in the muddy ground a while stuck. Noteworthy are certainly the cost. the state of lower Saxony to have paid € 80,000.00 rescue costs for the two stranded whales from Wangerooge.

May be lying out from various reasons either. On Wangerooge it was interalia the tourist concerns. Also applies for the whales since 1972, the Endangered Species Act. This applies counts even if the animals are dead. Since the fine ivory teeth are possibly a trophy. The lower jaw with the ivory teeth were separated as a precaution during the salvage to prevent such theft. The young male animals taken during the low water of two caterpillars on land before the dike before Kaiser-Wilhelm-Koog.

The exact cause of the strandings in such large numbers is not yet clear. The country can all sperm whales from the veterinary school Hanover investigate, inter alia about the whales out – about the age, any diseases and place of last food intake. Staff at the veterinary school took it on Wednesday numerous tissue samples of the stranded whales male. Also present was the Walspezialistin Hanover University, Prof. Ursula Siebert who already excluded death from lack of food, “the animals are starved not that we were able to now see their stomach contents, the animals had a lot of food from the North Atlantic in their digestive tracts.. “

Sperm whales are strictly protected by the Washington Convention, trading is prohibited with the animals and the parts obtained from them recognizable worldwide. The use of public relations, education and research can be approved by the official bodies werden.Verschiedene museums, research institutes that have expressed in the national park administration interested in the skeletons of whales. The requests are being examined by the National Park Service. The carcasses of the animals are disposed of in the rendering industry. 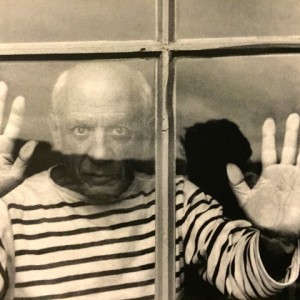 "The perception changes - but the sensitivity to the artistic upheavals of the 20th century remains", opened Prof. Michael...
Copyright 2014 Ruth Schalk
Back to top