Every year at harvest time, farmers experience the same disaster: In Germany about 500 000 Wild animals fall victim to the harvesters. They are caught by the sharp shearing blades of the harvests and then injured or killed. Crouched low in the grass, the little fawns and other wildlife babies protect themselves from danger, they think, but it’s just the other way round. Some farmers are looking for them on foot before starting to cut their fields. They put the little animals at the edge of the field before using their machines. But they seldom found all, the surfaces are usually too lengthy. Some Northern German Farmers solve the problem now with drones.

Equipped with GPS and thermal imagers the small aircraft could track the wild animals in the fields, so that they are not run over and injured by the harvesters. Shortly before the harvest the drone is checking the fields to locate the hidden wildlife. As soon as the animal is visible on the screen, the farmer fences the place of. So he can then drive around with the harvest machine.

For one hectare the octocopter takes about 1 hour. 31 fawns have been rescued this way in Western Pommerania this year, during the mowing time, they say. It costs around 2.500,00 € to fit a drone or an octocopter with the extra-Supply for this Job, the german wildlife org. says.

sorry, it is in German, but you can catch the idea by watching 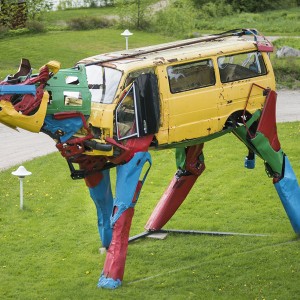 Review Photo: Holy Calf Miina Äkkijyrkkä is not just a Finnish artist that inspires from recycled auto...
Copyright 2014 Ruth Schalk
Back to top