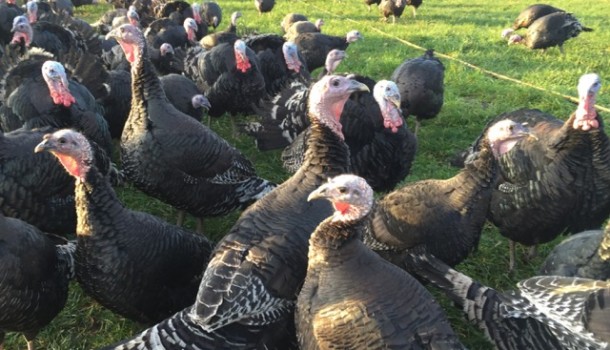 Turkey production in Germany, or in the EU, is first place simply shocking: In 114 establishments in Germany last year they bred 37,070,345 turkeys (source: Statistic Federal Office). Only in 45 companies of which it comes to smaller stocks, among 2000 animals; you can possibly assume that the birds are doing well, because some farmers try to bring them up as sustainable as possible. 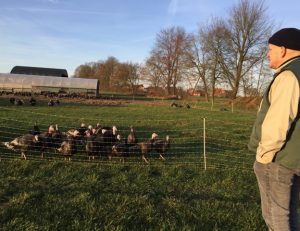 One of them is Carsten Bauck, from the Bauckhof, a farm situated in a small village in Lower Saxony. He gained several years of experience with the traditional turkey feed, until he simply did not want to do that anymore: “The available hybrid breeds have been unilaterally grown on performance, such as meat approach, regardless of the animal health,” says Bauck. “Since this arise big problems such as Pododermatitis (inflamed feet), disease of the skeleton (primarily by the extremely heavy weight, too big chest), cardiovascular diseases, behavioral disorders, etc …” In general, the animals are hypersensitive and very susceptible to disease. It lacks robust turkey breeds for organic poultry farming. So he quit the conventional turkey farm early 2014 and pushes a nationwide unique research object. 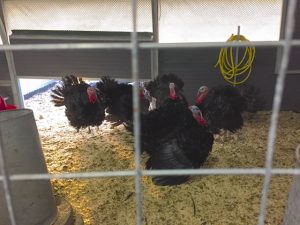 In May 2015, the first “feathered Brits” moved in, real good looking Hockinhulls Bronze and Black, as well as Kelly’s BBB, together a herd of 400 turkeys – all still unfortunately from the hybrid breeding industry *. But Carsten Bauck is now very proud of his gobbling nude heads from England. “They are fit and healthy! Now we just look for a genetics that works antibiotic-free.” The Bauckhof won a veterinarian from the University of Kassel, for a corresponding promotion. She is now looking for a suitable breed for organic farming systems. By doing this Bauck wants to get independence for himself, and for others as well, of the conventional hybrid breed vendors.

The large and huge turkey producers economies work still primarily for profit. A legal rule by the government for the humane treatment of turkeys attitude could stop it, but there is none. These animals are thus primarily hybrids – a ruthless profitable mixture of a lot of chest, disproportionate rapid growth and an excessive amount of weight, for example, the so-called BUT 6 by the Aviagen company. The company even advertises it that way: The European benchmark for profitable meat production, and above-average liveweight. One can recognize already on the turkey photos of the companys homepage, the animals are due to their weight, staying there with their legs quite wide apart.

Animal welfare organizations speak of this as torment breeds. In July 2015 PETA (People for the Ethical Treatment of Animals) reached the final charges against big turkey fatteners as the Heidemark Group. With a poultry Charter 2015, the Central Association of the poultry industry is trying to calm things down and simply formulated rules of lived default. But the result was highly disappointing, took Cornelie Hunter, a member of the Animal Welfare Committee of the Federal Chamber of Veterinary Surgeons and Land commissioners for animal welfare in Baden-Württemberg. The industry pledged itself in fact to nothing, and they make no suggestions how more animal welfare could be provided sustainable.

The animal welfare organization Provieh describes the overwhelming situation of turkeys in Germany as very cramped “Five hens and three cocks have to share about a square stocking densities 45-58 kg per square meter, this is common today. In such distress the animals are not able to live in natural behavior. Social minimum distances can not be complied so rank disputes could not be resolved peacefully. In addition, the turkeys are the whole fattening period on wet, hard litter in a completely barren environment. The result are chopping strokes, feather pecking and cannibalism. To avoid the high injury rate (and thus preventing the economic losses), they cut the Turkeys beaks. This is an extremely painful amputation, because beaks are traversed as tactile organs full of nerves, as in about our fingertips.“

Strong losses of about 10% the intensive-breeders calculate from the outset, which are a few thousand animals per each charge. Many also die from fear. The animals are sensible and highly sensitive. The basic needs of turkeys include social behavior, personal care, resting behavior, different types of motion, as flapping, walking, running, and various techniques of foraging and borrowing, as pawing, digging, picking, chopping and hunting. The acting out of many needs is under the conditions of intensive fattening hardly possible. Only at the Bauckhof, the farm of Carsten Bauck, is sufficient outlet available, and the animals are completely free of antibiotics:

A turkey is a funny bird,
Its head goes wobble, wobble,
All it knows is just one word,
“Gobble, gobble, gobble.”
(Author Unknown)

They still rumbling happily to himself – turkeys just yet … but it’s Christmas and soon they’ll risk their neck in Baucks Private meat factory. Under the experienced eye of Mr. Arndt they will be made smoothly and stress-free come to death. Turkeys are actually American desert dwellers. In the United States they traditionally come for Thanksgiving on the table. Germans enjoy the big birds, 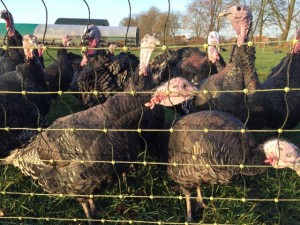 since the BSE crisis and various other meat scandals. Turkeys became a year-round growing popularity. Baucks eco-birds for Christmas are already sold out, but you can find also: chicken, eggs, beef, potatoes and vegetables and much more manufactures at the store of the Demeter farm.

* Hybrid breeding industry: Is specialized in almost all areas of farm animal breeding animal “Genetics” industry. Very well described in the critical Agriculture Report 2015 by Susanne Gura, the Livestock Monopoly. For a better comercialization of the livestock breeds they play “God”, means they cross different races as long and as much as possible to get the most benefit out of it: for example danish pigs are crossed until they have a rib more. The Danes have managed to make their Dan-pigs get also more piglets than they have teats. Turkeys are bred like chicken, they get oversized breasts, because the consumer favorite food chest.
The fatal to the story is also, that the hybrid economy makes farmers totally dependent, because they can not breed these animals by themselves. Most natural genetics are now at the hybrid breeding monopolist. Another reason why this project of Carsten Bauck is so crucial, it includes the chance of healthy Turkeys and new Biodiversity, which gives the independency back to the farmers… 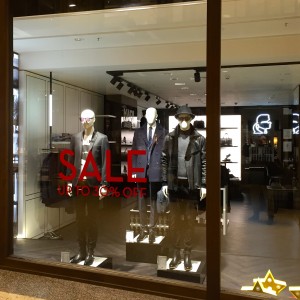 Well, Karl Lagerfeld got back to his roots, you might think. Finally, he was born in Hamburg and only for over half...
Copyright 2014 Ruth Schalk
Back to top