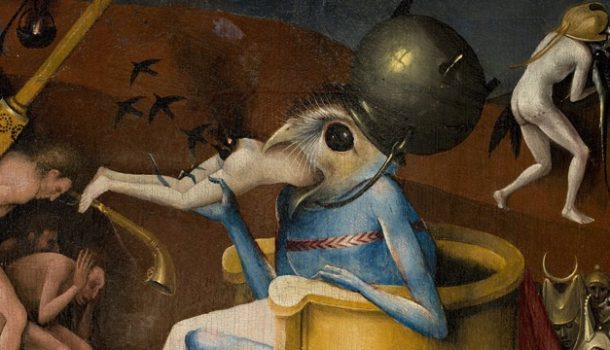 It’s fascinating how vivid the religiously composed images of Dutch painter Hieronymus Bosch are. True to detail and 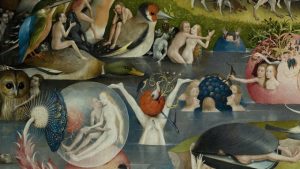 c as a photo-reporter, Bosch throws the medieval scenery of his surroundings back to the viewer. Lovingly designed, full of symbolism and mystery. People look distressed and anxious, rarely happy, because the time then was mainly marked by epidemics and ravaged by war. Lots of his paintings include a little Owl, standing for the evil that may be lurking in the dark at every corner. His incredibly creative painted mythical creatures are there to accompany the horrors of the Middle Ages yet. Monsters 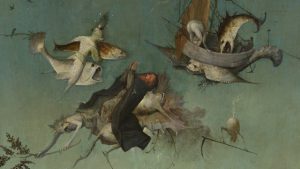 and goblins wander in abysses right into hell, as an expression of the fear of damnation and torment. Some body parts seem out of place, there where the upper middle class celebrating uninhibitedly. The illustrations do without a certain quirky comedy in his attempts to reflect the secularization of time. His interpretations of the church is carried during the 16th century. 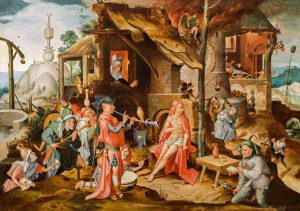 Jan Mandyn 1560, The Mocking of Job, at the Bucerius Kunstforum

The urban bourgeoisie fought for more self-determination.With humor and irony Bosch criticized undesirable behaviors that were condemned as perverse within the world of his time. Changes in society, then as now highly topical and therefore perhaps so incredibly fascinating. Also we are in a time of change, marked by uncertainty and threats: 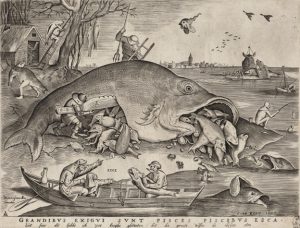 the big fish eat the little

A man resting on the promenadeof Nice while turning whole families into death. In Munich people opened fire on other people in the Olympic Center, 2016- a year full of attacks and unpredictable events, shocking and depressing, loud bad news. In Hamburg since 4th of June a corresponding exhibition runs: “The world Upside Down- Hieronymus Bosch’s Century“ at the Bucerius Kunst Forum. It shows engravings and paintings of students of Hieronymus Bosch. Some engravings representing old proverbs such as the drawing of “The big fish eat the little”, now make as much sense as 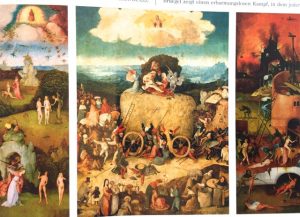 The Hay wagon, in the catalogue at the Bucerius Kunstforum

500 years ago, almost as if this would have changed over the centuries nothing. All main churches in Hamburg have involved since 4 June Hieronymus Bosch and the current events in your sermons, because the artist is currently on and after 500 years! On 24.7. you could have heard him in the St. Michel Church, one of Hamburg’s landmarks. Pastor Roeder prays “From the thrill of life and other follies”, the assassination in Nice and the other terrible events.
This year 2016 is currently the year which is in unprecedented fashion for bombings, violence and murder. It is a year that indicates upheavals. At the same time, it is the anniversary year of the artist Hieronymus van Aaken (Aachen). That is the real name of the painter, who paints in the third generation, like his grandfather and his father. Hieronymus of ‘s-Hertogenbosch; that’s how he signs his paintings.

When he died 500 years ago, he was already well known, far more than his father or grandfather. Though worldwide only about 25 works seem to be painted by him originally. For the anniversary year, a group of experts set off around the world gather up his works and to check for authenticity. One of his most famous paintings, the hay wagon, a triptych on oak was as checked. On hand of the rings in the wood can be the age of the tree identify. There are now but also to check the authenticity of a number of other agents and Trocks. There is also a documentation. From 15 September, the film then nationwide comes to the cinema: Hieronymus Bosch – creator of the Devil

Even during his lifetime Hieronymus Bosch traveled a lot and gathered impressions. He painted for the Spanish king and lived in Madrid. Much of his work is therefore now hangs in the Prado in Madrid. To mark the 500 anniversary, the museum currently shows an extended exhibition. 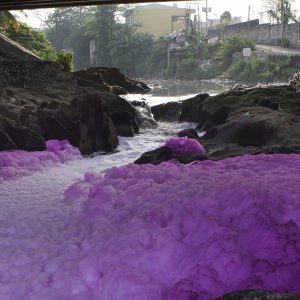 Whether pink, yellow, green or orange, in India, China ... everywhere, where textiles finished en masse, you can read the fashion...
Copyright 2014 Ruth Schalk
Back to top