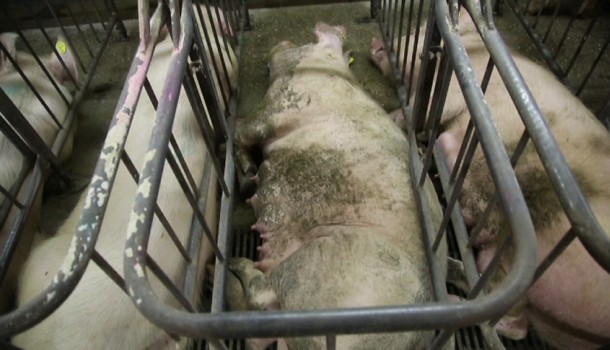 “The” pig-life ” at Mr. Straathof’s farm is still bad, but now no longer quite as bad”, remarked Mathias Fangohr, from the office Frederking of the green party. For hours they struggled against the gestation crate attitude of Straathof Pigs, in far too narrow mesh cages, the Greens and the veterinarians and the animals have won yesterday, perhaps a nationwide success:

Yesterday the Magdeburg Higher Administrative Court (HAC) decided to question the nature and breadth of crates in the sow management. The DEMVA GmbH in lower Saxony, that belongs to the group of companies of the Dutch Adrianus Straathof, had complained in second instance against the animal protection law requirements of veterinarians of the district Jerichower Land, which were located in the core because of the attitude in too narrow crates. After five hours of public hearing, the action brought by the judges was rejected as unfounded and a revision not approved. The dispositions of the veterinary authorities are therefore legally binding. For this purpose expresses Dorothea Frederking, agricultural policy spokeswoman of the parliamentary group of Alliance 90 / The Greens: “Yesterday’s decision of the Magdeburg Court is a breakthrough for more animal welfare in pig farming in Germany. It’s a further step in reversing 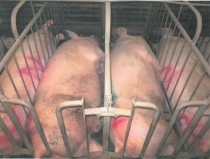 in industrial animal husbandry. All are now required to implement the animal welfare livestock regulation in the wording, so that each sow can lie freely stretch and injury free her legs in a lateral position. This jurisprudence, veterinary offices and their supervisory authorities and also public prosecutors and criminal courts have no longer an excuse or an apology for not to be active in terms of animal welfare in livestock farming Regulation. The Regulation is clearly, because under Section 24 paragraph 4 point 2 of the German animal welfare Law, the crate must be such that each sow, when lying down, can stretch her head and her legs freely. And that’s not guaranteed today many times in practice. “

“The county argued against Straathof personally in November 2014 and against the pig facility GLAVA GmbH in Gladau in January 2015 a livestock ban. With yesterday’s OVG decision to the crates also a clear signal of the pending court decisions may have been sent to the livestock bans. The main proceedings have been suspended since February 2015, as the courts seised wanted to wait at the request of lawyers Straathoffs yesterday precipitated by OVG fundamental decision. I am confident that the courts will continue their consistent case law in favor of animal welfare even in the livestock ban process and thus animal tormenting systems in pig farming in Germany finally put an end to. “

Background:
Before Magdeburg Higher Administrative Court took place yesterday, the public hearing on animal welfare and animal anti-tortured breaches pig plant of DEMVA GmbH to three procedures. In one case, it was about the crates. Nowadays, the sows are in big, industrial livestock farms often for weeks squeezed into narrow metal cages. They can not even put in an extreme case, lying sideways, let alone stretch your legs. So a sow with 1.05 meters height body was found in a box prior years ago Gladau in Straathoffs plant during an official inspection, which only 48 centimeters wide. Pure animal cruelty. It comes to damage to the musculoskeletal system and by the inevitable contact with the bars to skin injuries and painful inflammation. Especially through the agonizing tightness out the sows pain, suffering and damage. This deplorable state of affairs is now unfortunately in many large pig farms established practice and must now be terminated immediately at the latest.
The judge made it clear that there was no need to impose specific minimum widths in centimeters at chest level control. Relevant is rather to ensure that each sow can stretch its head and legs freely and injury-free in accordance with the Animal Protection Regulation livestock lying on its side. This may for example be realized in that the width of the box prior level of Sau equivalent.

Basically incredible that an existing animal protection law is only now being implemented. As evident how much “power” has been well exercised. Now, after all, a small success. Appropriately, it would abolish the crate farming in Germany and elsewhere in Europe completely. For the curious, crafty and neat animals living in the boring, monotonous grid cages, on their own excrements is an unbearable torture.