The hateful 8 – Tarantino’s skillful game with the death 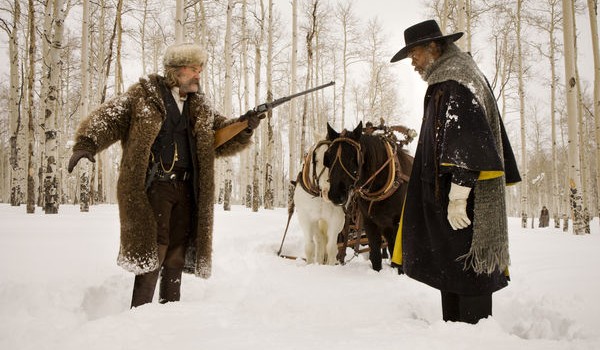 Blowing snow. A carriage with a horse team of six, cuts through the landscape, snow-covered forests and mountains in the background – a stunning scenery. Amazed, you find yourself dipped in the magnificent landscape of Colorado. Tarantino has turned to Ultra Panavision 70, an unusual, oversized Letterbox, same they used for Ben Hur. A format not 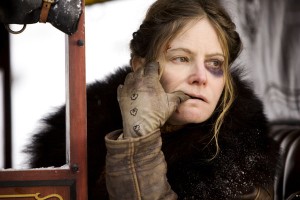 used for almost 50 years. It’s winter, a real winter with lots of snow and a powerful storm raging across the whole screen, which acts gigantic. The crunch of the carriage wheels when driving through the snow can not be heard, but Ennio Morricone’s musical promise of goosebumps when Quentin Tarantino opens the first chapter of his new Winter-Western book: 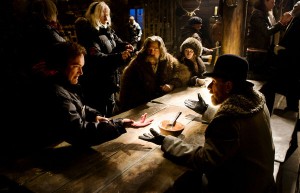 The story takes place shortly after the American Civil War in Wyoming. The last coach to Red Rock attempts at breakneck speed the frosty Blizzard to escape. Suddenly, a Major of the Yankees (Samuel L. Jackson) is blocking the path. He is colored and sits on three dead tied. His black skin acts against the white snow even darker. Squeaky is the vehicle just to stand right before him. In the carriage sits the infamous bounty hunter John Ruth, “The Hangman” (Kurt Russell). Chained to him sits the hardboiled Daisy Domergue (Jennifer Jason Leigh). A bounty of $ 10,000 is awarded for the wild ‘Lady’.

Ruth wants to hang the ‘bride’ as soon as possible to see that he can grab the loot. Each additional stop or stay annoys him. But the coach has to hold again. Instead of leading on to Red Rock, it takes shelter from a blizzard at Minnie’s Haberdashery, a quaint ranch in the middle of nowhere. There, they meet people who are not what they seemed to be. It’s all about relationships and dramatic encounters between eight hateful people. “Everybody is dangerous in his own way. People will have fun to watch these characters,” says Tarantino. One of the actors, Cage Joe (Michael Madsen, alias Kill Bill) said that the story possessed relevance even beyond the movie, because it is acting on our society, separate from the psychological boundaries that keep people apart. Another actor describes the story as a wonderful encounter in Hell … 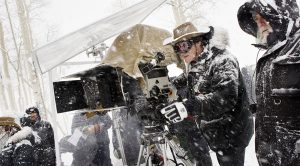 Certainly Quentin Tarantino created a cracking winter Western. The film was launched in December 2015 in the United States and played there already about 4.5 million US dollars. Tarantino’s eighth film recalls his first directing being similarly fuelled by claustrophobia, suspicion and intrigue, but Reservoir Dogs didn’t have Hateful Eight’s… The film has been nominated for 3 Golden Globes. About his now ninth nomination, in the category Best Film Score, composers legend Ennio Morricone is happy. From the superb cast Jennifer Jason Leigh has chances on the

So much praise now, but first the cult director did not even want to shoot the movie after the script was to unauthorized dropped into the public. Tarantino directed “only” a reading of the script with his actors before 1600 fans in a theater downtown LA. The grandiose success of this special premiere finally convinced him to make the film. Almost exactly to the day one year ago, on 01/07/2915 they started the production in Colorado. Only at the snowstorm they had to wait for, and it was chilly and cold but …

His brilliant world premiere THE HATEFUL 8 last Monday in Los Angeles. Matching to the event to the presented 70mm roadshow version the glorious event took place in the historic Cinerama Dome ArcLight Cinemas, with Samuel L. Jackson, Kurt Russell, Jennifer Jason Leigh, Michael Madsen, Demian Bichir, Walton Goggins, Tim Roth and Bruce Dern, the 8 fully assembled around their top form director Quentin Tarantino, for their tremendous work to an enthusiastic audience reveal. The exceptional performance with a specially composed by the just nominated Grand Master Ennio Morricone Overture recalled the era of classical Hollywood cinema and proved once again: There can be only one Tarantino!

In Germany the Roadshow-Version starts at the 28th of January 2016. Nationwide launches THE HATEFUL 8 in the 167-minute digital version, which will be seen mainly in the other cinemas in Europe. The widescreen version runs only in a few cinemas which would have to investigate on the spot respectively. 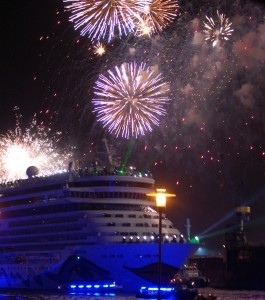 They are crazy about firecrackers to shoot in northern Germany and mostly in Hamburg. Amazing how the usually british temperated...
Copyright 2014 Ruth Schalk
Back to top